A woman of the high aristocracy

The traditional treatment of Byzantine clothing and its terminology in most currently available costume books, and, indeed, in older scholarly works,1 is characterised by utter distortion. Within the last decade a few academic publications have improved the situation a little, but mostly not in ways that would help anyone wanting to make clothing that a non-royal person would wear.2 The bulk of material on the World Wide Web is very much worse. Even the Latin terminology is used in ways that have only a tenuous resemblance to primary sources, and no account is taken of the fact that Greek was the dominant language of most of the Roman Empire throughout its history, and had completed its take over of even elite literature and government by the sixth century. Through Late Antiquity and the Middle Ages the language itself changed. New words were assimilated and some old words and usages adapted. The pictorial art that people who research dress superficially rely upon so much largely masks these changes, for the most sumptuous aristocratic art (that is the art that has been normally selected by Art Historians for reproduction) was conventionally constrained to a greater or lesser degree of stylisation. Thus, by the tenth century both the clothing and the terminology was very different from what is commonly believed today.

See the author’s major work, By the Emperor’s Hand: Court Regalia and Military Dress in the Eastern Roman Empire, Frontline Books, Barnsley 2015, for a compandious exposition. 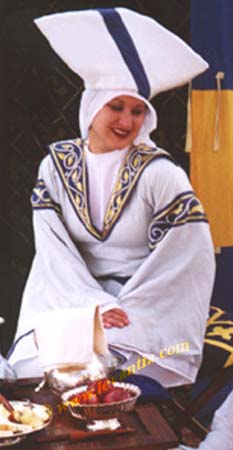 This outfit is predominantly based upon pictorial sources of the eleventh century, with reference to tenth century literary sources.3 The ensemble consists primarily of a delmatikion (dress) and es&ocircforion (chemise), a propol&ocircma (hat) and v&ecirclarion (headscarf).

(Run your mouse onto the picture for full-length front view, and off again for a full back view.)

In the Earlier Roman Empire the dalmatica was a tunic with wide sleeves worn by any of the sexes (men, women and eunuchs). Originally this simply meant that the sleeves did not taper to the wrist. From the fourth century the term was adapted into Greek as δελμάτικη / delmatikê and later δελματίκιον / delmatikion (plural=delmatikia). Near the end of Late Antiquity both the garments and terminology began to evolve in different directions. The term κωλόβιον / k&ocirclovion, originally a sleeveless tunic, supplanted delmatikion for the male garment which continued in the old form. Women’s delmatikia, in contrast, continued with the name and began to develop wider sleeves. Initially this meant only a modest flare. That style continued through into the eleventh century, but by the tenth century the height of fashion for women of the high aristocracy decreed a large drop of almost three-quarters of a metre at the cuff. These trends were imitated by fashion in Europe leading to the wing-sleeve dresses which are such a well known feature of western aristocratic women’s clothing in the late eleventh and twelfth centuries. A close-fitting round neck was the original form of this dress and that style carried through. This v-neck with lapels and back-flap came to be the height of fashion no later than the early eleventh century, possibly based upon a Persian style known to have existed in the tenth century.4

The standing collar was a unique characteristic of Roman ἐσωφόριον / es&ocircforion (shirt or chemise) introduced no later than the late tenth century.

The term προπόλωμα / propol&ocircma originally designated the padded headroll seen on sources like the Empress and ladies mosaic in St. Vitale, Ravenna. In the tenth and eleventh century it seems to have been transferred to these extravagant hats.
βηλάριον / v&ecirclarion was the name for the headscarf, while μαφόριον / maforion came to refer to a particular stylised form used as formal court regalia.5

This sort of outfit would rarely have been seen outside private quarters, but should it be so, it would be covered with a half-circle cloak broached centre-front called a μανδύας / mandyas or μάντιον / mantion. (See the page entitled “A Typical Outfit”.)