The military manuals from Constantinople have a limited amount to say about the everyday clothing of the common soldiery of the Enduring Roman Empire. When members of the military took part in the ceremonial life of the court, more precise demands were made by the Book of Ceremonies. For much more information see the author’s book, By the Emperor’s Hand.

A member of the Great Macedonian Hetaireia 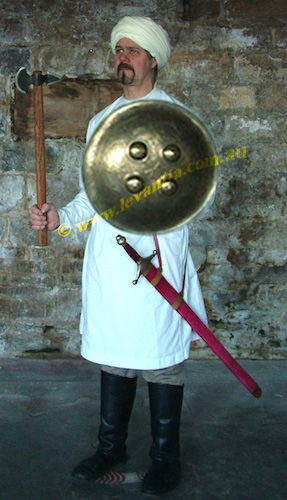 The Book of Ceremonies describes events at which substantial numbers of the Constantinople-based military units were required to turn out. Formost were the Great Macedonian Hetaireia. The Book decrees they were to wear shirts (esôforia) and swords, and to carry axes, and shields which were variously bronze, iron or gilded.

The specification on shirts was probably to bring them into conformity with the dominant white colour scheme of most of the court garments. (See the page ‘A junior courtier’ in the clothing section)

While the axes and swords were undoubtedly part of their usual equipment, the shields seem to have been parade pieces.

Triumphal regalia of a Prôtospatharios

In the middle Byzantine period, Constantinople saw a continuation of the ancient Roman practice of celebrating a public Triumph for a successful military commander. An addendum to the Book of Ceremonies describes two very similar historical Triumphs celebrated for earlier Emperors as paradigms for future practice.1 As the Emperors entered the City through the Golden Gate, they were met by a party of Prôtospatharioi on horseback. Those courtiers wore gilded klivania over a garment described as a “true-purple spekion with gold clavii”.

This description is very well corroborated by the portrait of the Proximos Iôannês, donor of the Adrianople Gospels. That picture is annotated, not only with the donor’s name, but with his rank, court function and the date of execution, 1007. It is uncertain whether he wears a turban because it was common military practice (including in these ceremonies) or because he was Armenian, or both.

The fabric of Iôannês’ klivanion is a common functional construction,2 but it seems more likely that the sleeves would be leather, as the points would be rather dangerous if they were metal. Prôtospatharios is one of the more populous court ranks, and it is clear that only select few formed the honour guard on any given occasion. Hence it seems reasonable to suppose that parade equipment like that was kept in palace stores to be farmed out as needed in the manner described in the Book of Ceremonies for other regalia.3

In addition to the gilded metal of the body, this reconstruction has silvered shoulder-pieces with selectively gilded decoration and gilded leather sleeves. (Point at the picture if you want to see a close up of the arm.) The tunic is, of course, silk.