Medieval clothing in the Middle east was far more sophisticated than anything found in Europe in the same period. A common and continuous heritage going back to the Roman Empire and incorporating influences and objects from as far away as China and India produced a much more civilised society in all areas of life. The Seljuk Turks were a collection of nomadic tribes who migrated into the region from Central Asia. They rapidly shook off the primitive ways of that lifestyle, embracing the comforts, and to some degree the customs, of older settled cultures, indeed by the time the time they appear in pictorial sources around the end of the 6th century after the Hejra (AH. The late twelfth century CE) there is little that can be discerned in their dress which can be recognised as being native to them. However their particular fusion of borrowed elements with those indigenous to them is sufficiently distinctive.

This is the garb of a Seljuk male of the sixth to seventh century Hijri. (twelfth to thirteenth centuries ce) The sources for it include pictures from the extensively illustrated novel Warqa wa Gulsha of c. 622 (1225 CE) and copious surviving examples of Minai ware pottery. These sources represent, it need hardly be said, men of some status. In its simplest form the outfit consists of a hat, coat, shirt, trousers, belt and boots. Should cold weather or heavy wear require more, extra layers on the upper body or a padded or fur–lined coat and padded leggings may be added.

The terminology given is primarily from Gerard Clausen’s Etymological Dictionary of pre–thirteenth century Turkish, Oxford 1973. 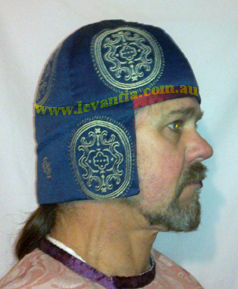 The native Seljuk hat, boerk, is a plain bowl with various shapes of turned up brim, some of which may be turned down at times to protect and shape the neck. The hat is made of felt or cloth in summer and fur in winter, and the bowl and brim are almost always of different colours. Milliners suppliers stock felt “sleeves” which can easily be made into these hats. The Seljuk Turks, like the Mongols, regarded the turban, or chalma, as women’s wear, although with increasing Islamisation this attitude faded due to the importance of the turban as a symbol of the faith.

The Seljuk coat, yalma, is a double breasted cross-over style. Simpler forms of this coat had been known for centuries in the region, but this type with the close-fitting round neck is distinctive. It was to be adopted later by Persians and northern Arabs, although never displacing the simpler type, which also persisted unchallenged amongst the Mameluks. The better type of coat was normally lined and had edges trimmed with a contrasting strip. Decorative bands often put on the sleeves were patterned with vine-scrolls, interlace or stylised Arabic calligraphy. The coat is fastened by buttons and loops concealed under the edges. In plain fabrics, substantial linens, fine wools and silks are the best to use for the outer. Brocades were popular for those who could afford it and it is sometimes still possible to find patterns close historical ones. Suitable fabric patterns for the coat are large vinescrolls, large stripes, hexagons with a design in the centre, and other geometric patterns based on hexagon and octagons. Less expensive decorative fabrics used similar fabrics were woven with vertical stripes, usually fine stripes of blue and red on a lighter background, and presumably there were coats in plain cloth. Lining could be done with silk, linen or cotton. Indigo resist dyed (ikat) and printed cottons were both imported from the far East and made locally, and can still be found quite easily today in patterns approaching those of the period.

Seljuks also commonly wore a more familiar and common type of coat which opens down the centre front. The Persian term kaftan, which is properly applied to such garments, had already entered early Turkish by the eleventh century. (The European use of this word has largely lost its original specific meaning nowadays.) Coats of this type survive in a variety of constructions.

Cutting patterns for garments under the coat are hard to document precisely for Seljuks. Likely guesses are a cross-over shirt cut on a similar pattern to the coat, to or the Chinese style, or a pull-over tunic of the type prevalent throughout the Middle East and Europe in this era.

A simple straight-legged, open-bottom style, loose but not voluminous. A contemporary Arabic autobiography is very informative on the way they are worn across the region, and the use of the leggings, as a traveller tells how he warded off an attacking lion. “O Zahr Ad-Dawla why didst thou lift thy leg to the mouth of the Lion?” He replied “My body as ye see it is thin and lean. There is nothing better clothed than my foot with its stockings, boots and leggings. I therefore thought that I would keep the lion busy with it rather than with my ribs, hand or head until such time as Allah (Exalted is He!) should provide relief.”1 This illustrates why trousers, even for use while riding could be made of quite light materials. The bottoms of them were tucked into socks, either knitted or sewn from a solid woven cloth, and tied off just below the knee, then they were covered with leggings, yishim, tied up to the trouser cord (ichkur). The heavy padded riding style of leggings were copied by Western knights to wear under their mail chausses.

Belts of men of military status had several straps hanging on each hip which could carry a bow-case and quiver, and sometimes also a sword. The richest could be ornamented with numerous ornamental metal plaques or bars along its length and a substantial buckle plate. These ornamented belts were called kur kushak. The British Museum holds an array of plainer Seljukid buckles in the form of a lion divided in halves which hook together. 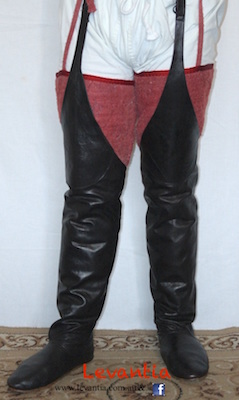 Various styles were in use, from a low calf form which was very common through out the region. The cavalry style that had originated in Late Antiquity with a high flap coming up over the knee was still in use. They could be made of sturdy leather of approximately 3 mm thickness, or of finer style in softer leather. The more encompassing cavalry boots shown on minai-ware pottery in lighter leather had a strap which tied or buckled up to an inner belt (ichkur) under the coat in order to support the tops. Standard colours were, just as today, brown and black, however some tanning methods produce a red colour, which is illustrated in the images, and leather can also be dyed blue with indigo. The most elegant and expensive boots were appliquéed with vinescrolls and floral designs.