Literary sources indicate a variety of types and sizes of tent in use in Rômania in the middle Byzantine era, although pictorial material only shows a very limited range to corroborate those. The most commonly illustrated are “round pavilions” or “bell” tents, in which steep walls surmounted by a shallower roof produce an outline like the classic bell shape. This prevalence of this form in art undoubtedly reflects reality, as this is a very practical and adaptable form, which moved rapidly into Western use with the advent of the Crusades. 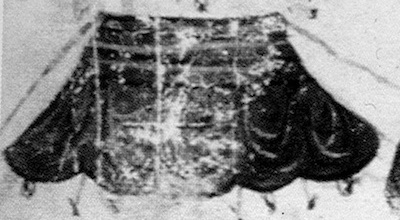 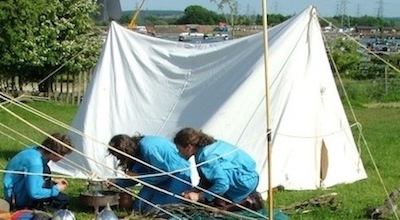 A line tents are the simplest and oldest form, but their simplicity is thier strength and they have been in continuous use to the present day.1 The earlier Roman Army used a modified form with side walls.2

Although not illustrated in surviving art, literary sources indicate that large pavilions were also in use by the imperial cortege and probably the commanders of large expeditionary forces also.3 These were almost certainly large versions of the ridge tent with side walls used in the earlier army as shown on Trajan’s Column. One mention of an imperial tent describes it as “with the shape of a church”, which may just mean a large rectilinear structure, but may otherwise indicate a more complex arrangement with a cupola. Tents for such high social classes, whatever the form, were often very ornate, embroidered especially with birds, beasts and/or hunting scenes in particular, clearly continuing a style familiar from earlier mosaics.4 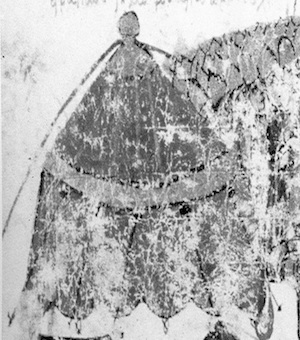 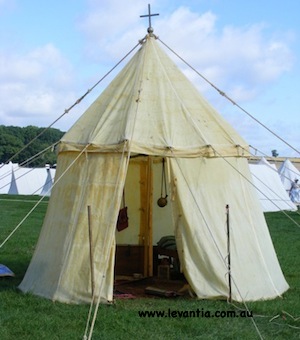 Some time prior to the eleventh century, the Romans converted to generally using round tents.5 One scholar suggested that this happened as early as the sixth century, and that this style of tent was adopted from the Avars,6 but the jury is still out, although one surviving sixth–century manuscript does show a conical awning in a single centre pole like the roof of a bell tent. 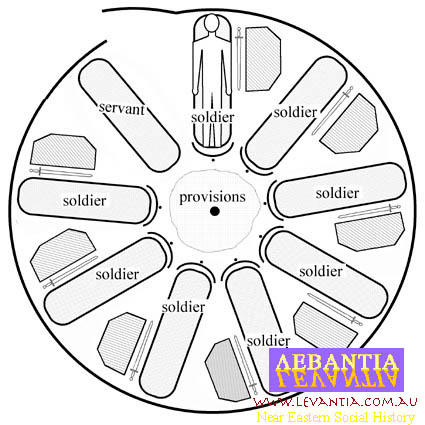 Some of the tenth-century military manuals are very specific about how the bedding and equipment of soldiers of the basic infantry unit, or kontouvernion should be laid out — spear and shield upright at the foot of the bed and other equipment on the left side (assuming a man lying on his back), with the provisions most securely in the middle. Such an arrangement could be done in a rectilinear structure, but works very efficiently with a round pavilion as shown at left. This radial floor plan just happens to require a central height of 4.5 to 5 metres, thus precisely accommodating the “great kontarion” of that length recorded as being used in the tenth century.7