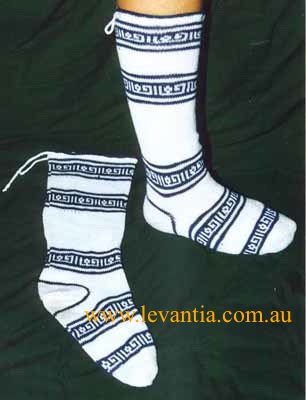 Some of the earliest examples of knitting in the modern sense, that is, with two or more needles, are a group of cotton socks which were found in Cairo and dated to the twelfth century. These are held in the Textile Museum in Washington, and there are several other comparable examples in that collection and others in Europe.

Tablet weaving is one of the most ancient method for producing decorative bands, going back to the fifth century b.c.e. By the middle ages it was employed throughout the known world. It attained its highest level of sopistication in the near East between the tenth to twelfth centuries.
The Great Palace complex in Constantinople is believed to have contained a workshop exclusively devoted to making bands, which probably used this method.1

This example of Islamic style band was woven by Laura Iseman to a design by Timothy Dawson. Just 4 centimetres wide, it is a floating weft gold brocade on 400 warps, bearing lions, peacocks and Arabic mottos commonly used as decoration reading “with good fortune” and “with blessings”.