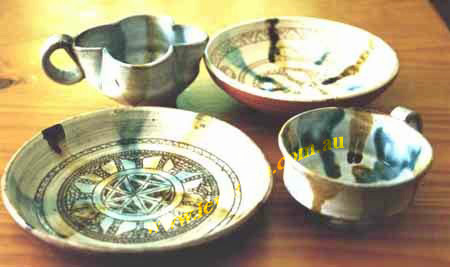 Pottery is one of the most durable survivals of any historical culture, and often serves to define its identity for modern scholars. These pieces of eleventh and twelfth century sgraffito–ware and splash–ware pottery were reproduced by Alex de Vos of Flaming Gargoyle Pottery from archaeological documentation supplied.1

At a still lower social level, wooden vessels were used. Sets of skoutellopinakion, that is a plate or bowl and a drinking vessel, are mentioned in the Typika of monasteries.

Other pictures of tableware from the eleventh century Serçe Limani shipwreck can be seen via this off site link. 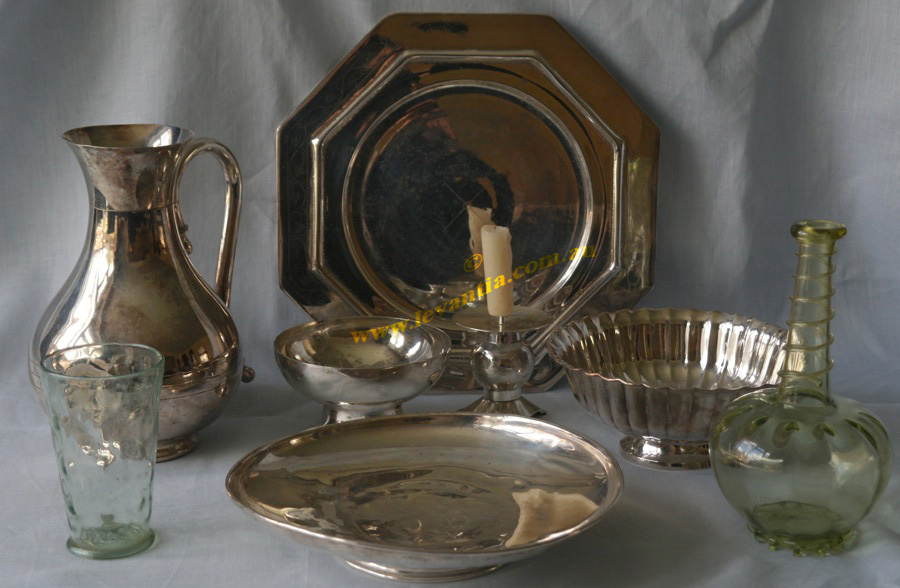 Wealthier Romans ate from metal tableware. Bronze and brass were used quite widely, and silver for the richest. The evidence suggests that silver tableware was less common in the middle Byzantine era than it had been in late antiquity, but it is still mentioned in literary sources and forms known in metal earlier are still represented in art.

The earlier Roman Empire is famous for its widespread use of sophisticated glassware. By the eleventh century, the glassware industry was well into recovery mode, as illustrated by an increase in remnants in archaeological sites and by the large consignment of glass carried by the Serçe Limani ship, wrecked about 1025. 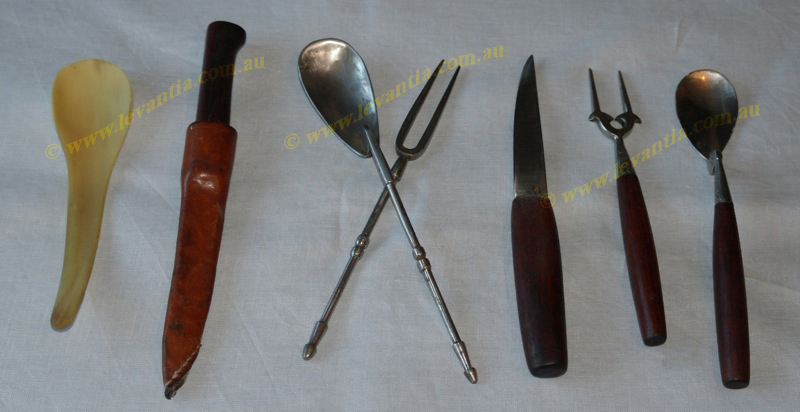 A small, single-edged knife was an essential tool carried by virtually every adult. When eating, poorer people in Rômania, just as everywhere at the time, ate more solid food with their fingers and moist foods with a spoon carved from wood or moulded from horn as here. Metal spoons had a distinctive feature of the bowls being significantly offset from the handle. See one of the pictures accompanying the article ‘Dining with Angels’ for some original Late Antique spoons.

The greatest indulgence at the top of the social scale was the use of a fork. Matched sets of spoon and fork are known from as early as the fourth century (Dumbarton Oaks Collection), and seem to have become more widespread in the eleventh and twelfth centuries, yet even then confined to the higher levels of society. The crossed set in the centre are based upon that early set, albeit less ornate.3 The set at right are based upon eleventh century frescos in Kappadokhian cave churches. In the first decade of the eleventh century a Byzantine noblewomen married to the Doge of Venice, Maria Argyropoulina, outraged Venetian clergy by her habit of using a fork.4