An example of Arab dress from al–azira 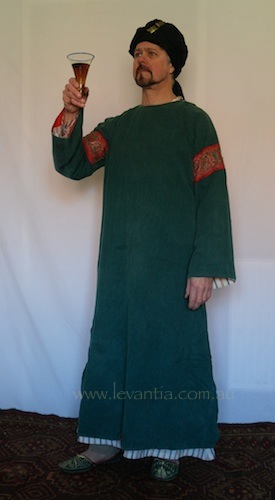 Clothing in Arabia, Syria and North Africa was always large and loose, a style dictated primarily by climate. This outfit is inspired primarily by the illuminated Arabic manuscripts of Dioskoridês made in Mosul early in the thirteenth century. Islamic custom has always been ambivalent about silk — there are hadith both for and against it. But the austere mode mostly lost out to a natural and widespread desire for comfort and opulence

Stripes and checks are the simplest decorative fabrics to weave, and so this motif of white linen with alternating stripes of indigo (blue) and kirmiz (red) is seen very commonly in the art of the period.

Across much of the Islamic world, a black turban signified that the wearer was a qadi, that is a magistrate. The practice is illustrated in the thirteenth-century copies of the Assemblies (Maqamat) of al-Hariri.

Although islamic doctrine forbids alcoholic beverages, this was always something honoured as much in the breach than the observance. In fact, one of the most copious genres of medieval Arabic poetry was in praise of wine, or begging divine forgiveness for the indulgence.