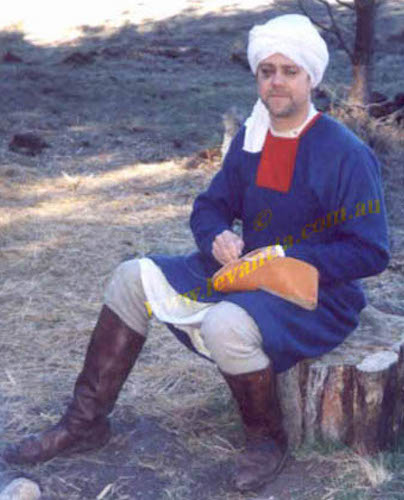 Tunics like this are typical of men’s clothing in the Eastern Roman Empire from late Antiquity to the eleventh century. At some point prior to the tenth century Romans adopted the ancient Persian practice of opening the tunic down from the left side of the neck. “True” Romiosi custom (as defined by the conventions of elite art) wore it as shown, that is, closed, while the art of other nationalities influenced by Constantinople show that it was commonly worn in a way that made a feature of it by leaving it open. (Mouse onto the picture for detail of the collar in that arrangement.)1

The turban had gained popularity among Roman men in the eighth century and persisted for centuries. It was never quite accepted as “properly Roman” and so despite being referred to quite often in literature, it is relatively rarely illustrated until the later centuries of the empire. A video showing a basic method for tying a turban here (6.5Mb).

1) Shown on the Church of the Holy Cross at Aght’amar in Armenia, and a Umayyad carved chest.