A saga of scale amour construction

I had always wanted to make a scale armour. Very early in my re-enactment career I made a sleeveless vest of Russian-style rectilinear plates, which I riveted to a leather base. There were lessons in that, and it did not last long.
The lessons from that first attempt were twofold:
The first lesson was that leather is the wrong base material. Leather is unsuitable because when stress and battle damage inevitably occur, the damage to the substrate is catastrophic, and virtually irreparable because the attachment (whatever method is used) invariably tears through the material.
The second lesson was that riveting is the wrong method of attachment. Riveting is wrong because the very means of application entails damage to the base material (pierced/punched holes) at the construction stage, and then when stress and battle damage result in failure, that failure extends the damage already caused by manufacture. Surviving examples (Dura Europos horse barding, Carpow, Alava, Burke) support these conclusions with textile bases, while the one riveted example known to me (Burke) has a unique form specifically designed to alleviate the issues with riveting.

Information on those scale armours (and much more!) can be found in my book, Armour Never Wearies: A History of Lamellar and Scale Armour in the West from the Bronze Age to the Nineteenth century, The History Press, 2013.

Later, I got scale-shaped scales and started a more considered cuirass in the early 1990s. Life however, intervened, and all I ever finished of that was one sleeve.

Hence, much later, when someone approached me to make him a full scale armour, I was willing to take the job on, even though I knew that the remuneration would in no circumstance be commensurate with the amount of work involved.
The aim was a hauberk-style shirt, knee length with elbow length sleeves. The customer was an occasional rider, as I understood, and so working from past experience of making equestrian armours I designed it with skirt divisions front and rear to facilitate that. Assuming contiguous scales entirely sewn, I calculated 3000 would be needed. I purchased them from Armae and got started. 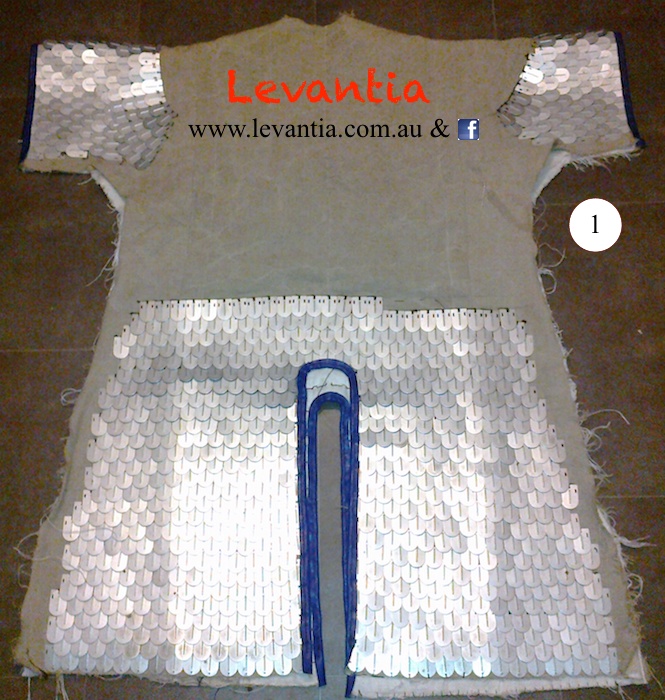 Therefore, as with the second attempt, I started with a textile garment. I decided that both strength and comfort could be served by making that garment lightly padded. The result was a heavy linen outer, two laters of wool cloth for padding and a medium linen lining.
The plan left the garment open up both sides for the main work of covering the bulk with scales. Once that was done, the sides would be closed and then covered with scales.
I started in from the sleeves and then up from the hems. It was mind-bendingly tedious work with so little reward in terms of visible progress, but I persisted, getting to the point where more than half of the surface was covered. (Picture 1) It was becoming increasingly difficult to do the work up inside the body, even with full access up both sides, and could see that the level of difficulty could only increase the nearer I got to the top.
That was when discovered that I had made a disastrously bad choice of thread. High stress areas, the outer and inner sleeve folds, were already falling apart, and even other regions were showing signs of serious wear just from the movement involved in sewing. The only remedy was the strip it back and start again.

I could not face it. I had been keeping a tally of the work and by this point I had put in almost 250 hours over the course of ... well, I cannot quite remember, but it seems like an age. I contacted the commissioner and begged him to let me refund the cost of the scales and stop. He said no.

The only survival strategy had to be to work out ways to streamline the project. Thus I went for help back to those Masters of Scale Armour, the Romans, and those who learned from them.
To ease the assembly of the basic fabric, rather than making the scales contiguous (that is touching edge to edge) I began overlapping them and stapling them into rows before stitching only along the top. The Romans had used non-ferrous staples, presumably to avoid fusion as a result of corrosion, and so did I. Finding a suitable material and method entailed more experimentation and learning from failure. 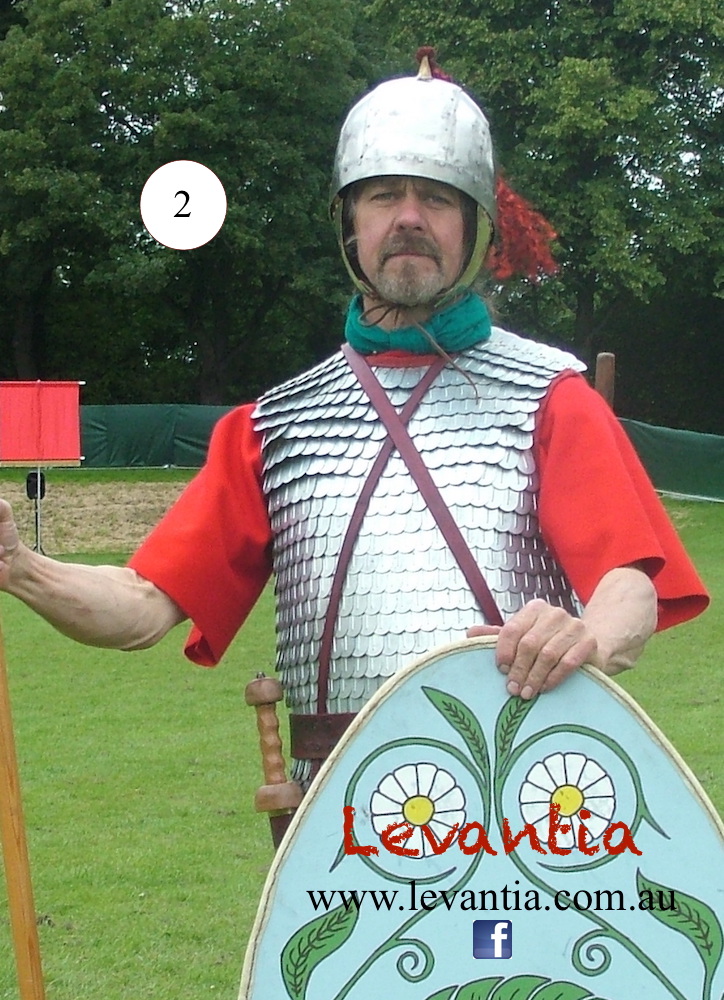 To minimise that issue of escalating difficulty mentioned previously, I decided to abandon the single garment and make a torso and separate skirts. (Once again, the evidence for that construction is explained in Armour Never Wearies)
So I began again. The tedium was hardly lessened, and overcoming it was all the harder with the legacy of the previous failure. The project had now dragged on for years. I could hardly force myself to start any work on it, and if I did, I could not sustain it for long. I do not know wether it was a mercy that the client did not press me or whether having more demands would have at least helped to maintain some sort of momentum.

There were always other more interesting things happening and to do. One of those distractions actually helped. In late 2016 I was drawn into the Hadrian’s Cavalry Turma project. Feeling I lacked sufficient suitable gear, I borrowed a third of the scales and roughly assembled a vest. (Picture 2) “How could doing even more of that work help? Especially when it would have to be stripped again just like the first attempt?”, I hear you ask. It helped because it did prove that a scale armour could be finished, could be comfortable and could look good.
There was still a long way to go – the main task was more complex and aimed for a better quality of construction. Life also intervened – getting a job and moving almost the length of England, and having my workshop and work in storage for four months while I found an affordable place to live in he second most stupidly expensive region of England. Then, another lesson. The coverage losses of overlapping the lames was greater than the gains made by reshaping the garment, so almost 1000 more scales were needed.

But, at long last, it is finished. The skirt suspension method (Picture 6) is not on the one I can document historically, but will better suit the physique of the person it is made for than the documentable method shown in Armour Never Wearies. 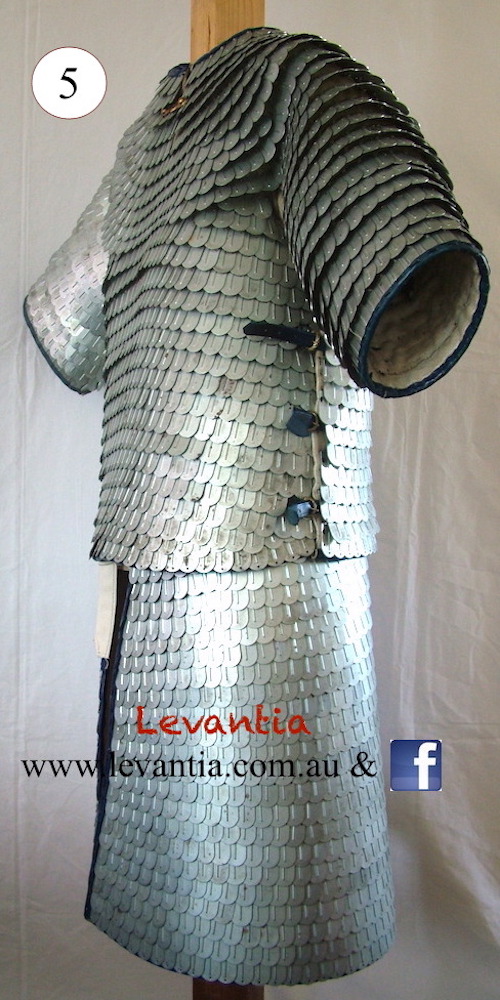 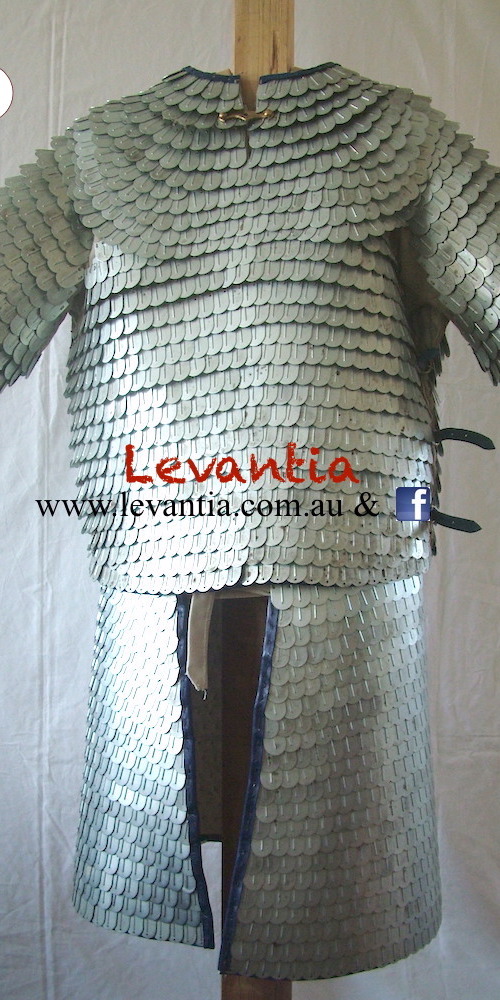 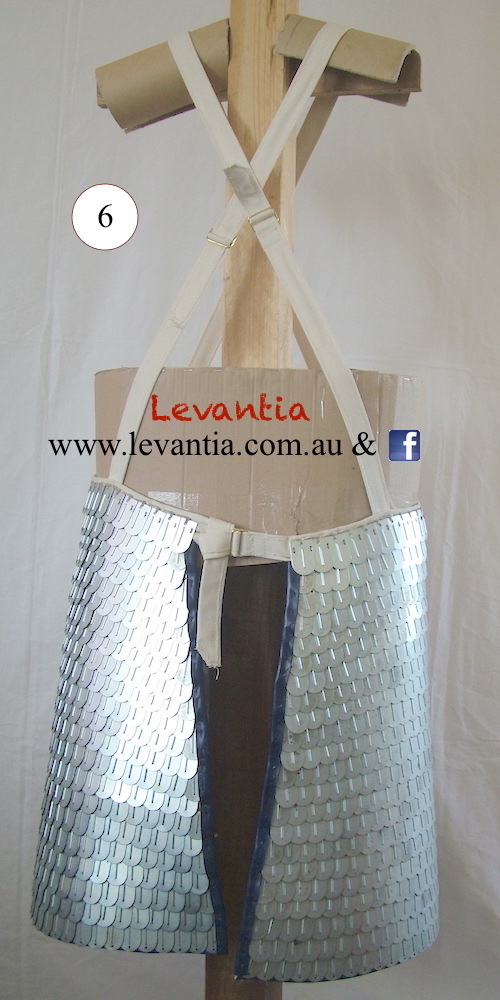