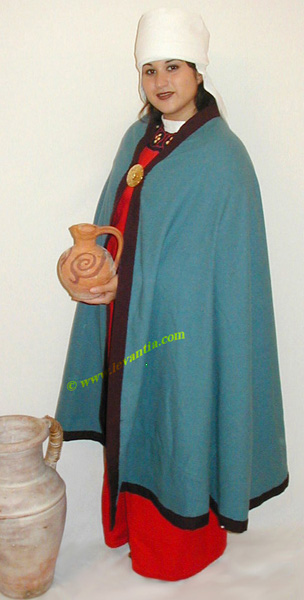 This is a detail of a more typical treatment of the outfit seen on the ‘Good Woman’ shown on the previous page.

Her headdress, which was very common wear in Rômania from the turn of the eleventh century, if not earlier, is called a σαβάνιον / savanion.1 Its method of wrapping can be seen here.

The ubiquitous woman’s cape, called μάντιον / mantion, is a flat half circle, and might occasionally have rounded corners.2

The dress is a simple ἱμάτιον / himation with close-fitting sleeves, in contrast to the wide-sleeved delmatikion of the noblewoman.3 The embroidery at the collar and cuffs was based upon tenth century craftworks. Point at the picture for a closer look without the mantle.

Dress constructed by Edith Castro to a pattern and design by Timothy Dawson.