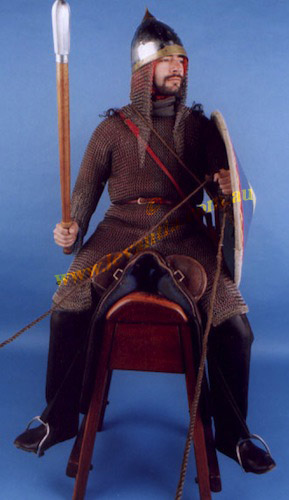 The prokoursatores or khoursores (whence comes the Western “Hussars”) were a medium cavalry arm whose job was to harass small groups of the enemy, pursue fugitives and scouting. They could be equipped in a kavadion and simple klivanion like the horse archer, or they could wear mail as here. (PM II.3) Their standard armament was a mace, sword and round shield.

The saddle is, of course, modern, but less different from a Roman one than from a European type of that time. The high European war saddle did not begin to be adopted in Rômania until the twelfth century.

Point at the picture to see a dismounted figure with some additional detail.