Placing the cursor on the footnote number will give an abbreviated view of the reference, while the full entry will be found at the bottom of the page. 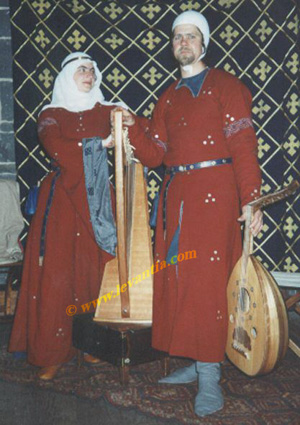 Despite periods of Muslim domination from 626 to 969 and 1085 to 1098 the City of Antioch retained a predominantly Greek speaking Rômiosi population throughout the early middle ages.1 It was also relatively spared the crusaders’ tendency to indiscriminately massacre the population of cities they captured, and so preserved that character under Norman, and later French,2 overlords through the twelfth and early thirteenth centuries. These overlords themselves acknowledged Constantinopolitan sovereignty on occasions in the twelfth century.3 The crusader elite inter-married with the Romiosi and minority Armenian populations extensively.4 Both the offspring of such marriages and some of the settlers found many aspects of Near Eastern culture seductive and assimilated them avidly.5

A General description of the ensembles

The main elements are under-tunics of double cloth, linen and cotton fibres spun together,6 dyed a deep blue, covered by an overgarment constructed with an outer of burgundy coloured wool7 lined with silk dyed grey and block printed with an Islamic design.8
The over-garments are powdered with triplets of silver sequins stamped with a design closely approximating those found embossed on Roman book covers in the Vatican collection,9 and embroidered around the upper sleeves with a geometric scroll pattern resembling opus sectile.10 (Detail of the embroidery in a new window.)
Both outfits have belts and pouches of blue dyed leather.11 fitted with hand embossed mounts,12 and buckle plates and strap-ends of bronze decorated with a technique of silver wire set in niello.13 The purses.14 are suspended from purse hangers,15 and have a small knife sheathed in the back.

The woman’s dress is of the close fitting, side laced style with wide sleeves inspired by earlier Byzantine fashion which became popular amongst Europeans in the early twelfth century16 and persisted in some parts of Europe until the late twelfth century.17

The man’s tunic is of the Persico-Byzantine pattern with the neck opening on the left which came into royal European use in the eleventh century18 and became prevalent across the social classes in Mediterranean Europe by the mid twelfth century.19 A coif and footed hose of grey wool complete the outfit.