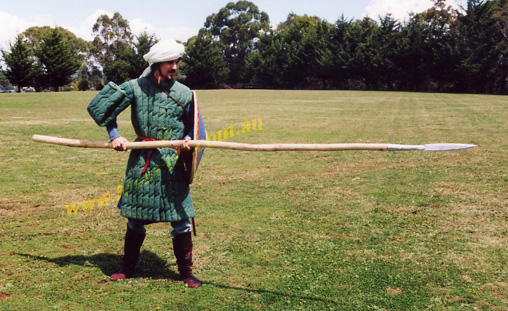 The menavlion (μεναύλιον) and the class of troops named for using them, menavliatoi, were primarily developed to counter the threat of frontal attacks on infantry formations by heavy cavalry riding armoured horses. The weapon was a “spear on steroids”, only the same length as a short kontarion (about 2.4 metres1), but much heavier and with a much larger blade. The manuals say the blade should be 30 centimetres long, and for maximum strength the shaft should be made from a whole sapling, “as thick as a man may grasp”. In the face of a cavalry attack, the menavliatoi were to reinforce the front of the formation, as shown below. Otherwise, they served as skirmishers to clear enemy foot soldiers from broken or obstructed ground on the flanks and so on as portrayed above.

1   This weapon and its wielder are discussed in the Composition on Warfare of Nikêforos Fôlas and the Takika of Nikêforos Ouranos based upon it. See Timothy McGeer, Sowing the Dragon’s Teeth for the text and an approximate translation.
On the subject of interpreting the sizes of equipment given in the military manuals see Timothy Dawson, ‘Fit for the Task: Equipment Sizes and the Transmission of Military Lore, sixth to tenth centuries’, Byzantine and Modern Greek Studies, 31 (2007). Download a PDF copy.