Lighting in Rômania and its neighbours 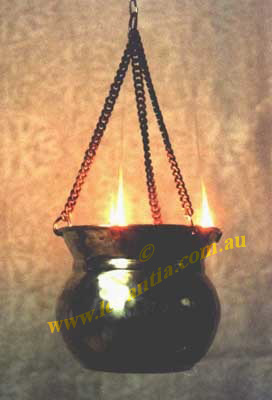 By the sixth century the ubiquitous “slipper” lamp of antiquity had begun to give way to more substantial styles of lamp. One of the earliest was the vase lamp. Originally executed in copper or bronze like this example, by the ninth century they were being made of glass. There is little evidence of the style persisting in the territory retained in the control of Constantinople after the expansion of Islam, but it continued in al-Islamiyya and evolved into the classic mosque-lamp most familiar from the fourteenth century century onwards. It is also depicted in Sicilian and southern Italian sources of the twelfth and thirteenth centuries. This example is based upon a surviving sixth century example in the Armenian Patriarchate Museum in Jerusalem, and shown later manuscripts. 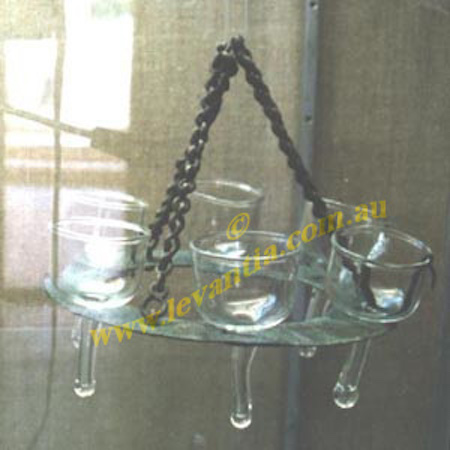 A very plain bronze ring polycandelon from the museum of Madaba in Jordan, showing a bronze clip which held the wick. (right) 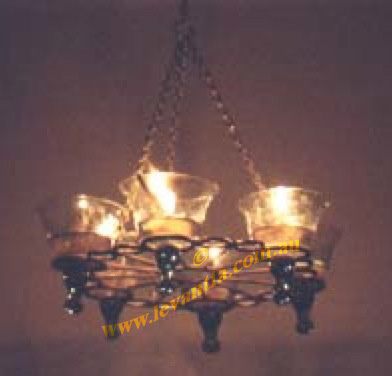 Another development of late Antiquity was the polycandelon. Rather than one large light source, the polycandelon used a varying number of smaller glass bowls or cones in a bronze or iron frame. Such polycandela were by no means confined to churches and palaces, for examples have been found with inscriptions indicating that they came from aristocratic households. 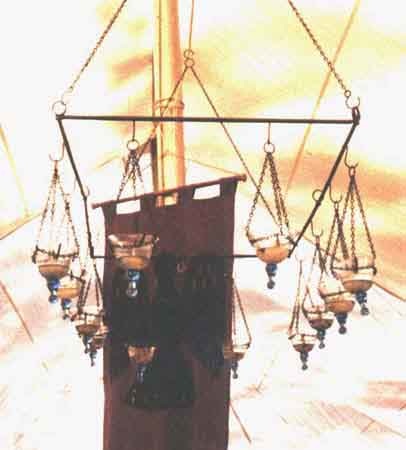 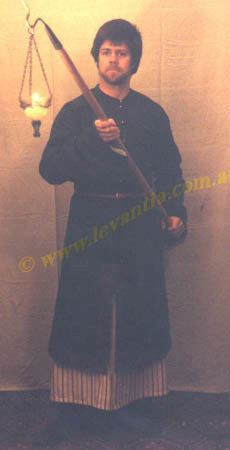 Evidence for the one-piece polycandelon like that above becomes much rarer in the middle and late Byzantine eras. Manuscript illustrations and the arrangements employed by the Ottomans when building their mosques in the pattern of Orthodox churches suggest that this was because the practice of dispersing the lamp bowls was adopted, thus giving a more even spread of light. The bowls were hung individually from ceiling or arches, or, as in this example in use at the 1995 Australian Convention of pre-colonial re-enactment, from an iron frame suspended from the ceiling. Such lamp arrays were evidently so extensive in some late Byzantine churches that the bowls from them could be recycled to be skylights in the domes of early Ottoman bath-houses, such as the one adjacent to the Nasruddin Mosque in Kastomonu, northern Anatolia. 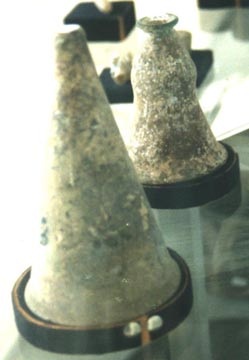 Since the early middle ages conical beakers of various sorts were used as drinking vessels throughout Europe and the middle east. Less often plain ones such as these in the Aleppo museum were also employed as lamp bowls. The use of vessels of this shape was more common in muslim countries than Rômania, where the globular and stemmed form was always preferred.