My time in re-enactment and Living History

Having completed my doctorate at the beginning of 2003, I moved back home to Melbourne, but found that after five years of intensive intellectual effort and stimulation it was hard to see what could lead forward in any positive direction in that city. Hence, after a couple of months I resolved to act upon an invitation to visit an old Melbourne friend who had moved to Sweden. 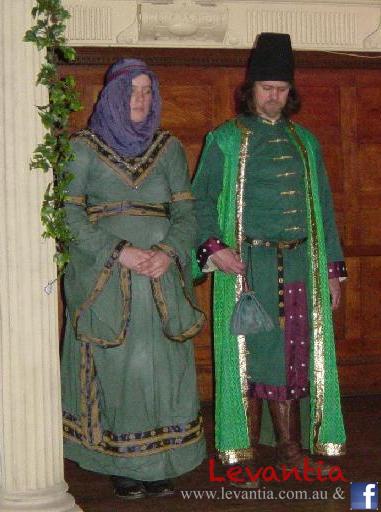 Dressed for my talk at the 1453 Commemoration. 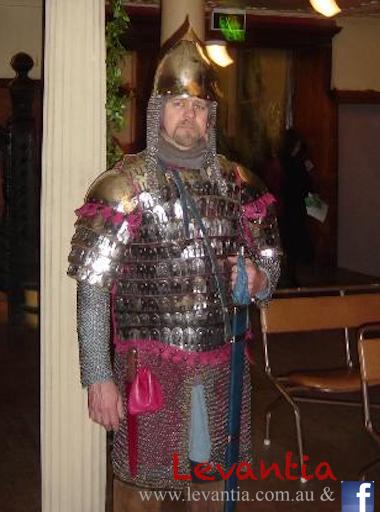 Dressed to kill at the 1453 Commemoration.

Before that, however, Melbourne had one unique event in store. I, along with the New Varangian Guard, was invited to participate on the weekend of May 31st (a significant date for the club at least!) and June 1st in what was termed a “Commemoration of Constantinople, 1453”. It is hard to imagine such an event happening anywhere else in the world other than Melbourne, for it was organised by a coalition of Greeks and Turks and successfully trod a tightrope avoiding Greek grievance and Turkish triumphalism. My major contribution to the event was a public lecture on clothing of the middle to late Byzantine eras and the influences from that feeding into Ottoman culture. I also added a more completely Roman element to the N.V.G.’s military presence.

At the end of July I set off for Sweden, finally acting on a longstanding invitation from an old friend from Melbourne, Arnold Pears, now living there. For a while I settled in one of the ancient capital cities, Uppsala, staying in a flat in that pleasant town. Arnold and his family had moved out to an antique summer house at Marielund amongst the lakes a few kilometres outside Uppsala. One day I cycled to Old Uppsala to view that famous location. On that day it so happened that between the visitors centre and the mounds that had held the Vendel burials there was a Viking tent and a handful of folk presenting to the visitors. In a lull, I wandered up to say hello. Introducing myself produced a surprising international celebrity moment — “Oh, you’re Tim Dawson!” At that point. I had no reason to think that whatever notice might have been due to me at that point for my research and publcations would have travelled so far. The group was Birka Hereda, a high quality society connected with the establishment and archaeologists working on the island of Birka. In the wake of that encounter they invited me to join them in the presentation they were to do at the ninth- and tenth-century capital of Sweden on the island of Birka a little later. 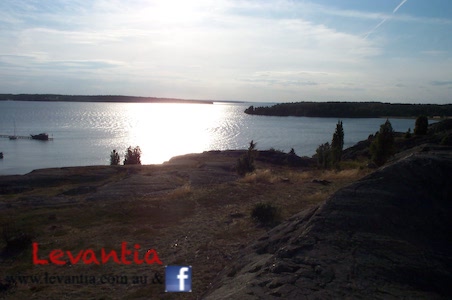 The Viking “road” from Birka. Looking towards the Baltic. 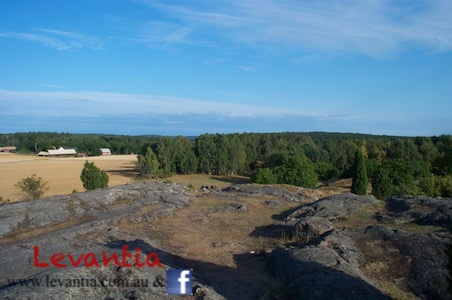 The view from the Birka town ridge towards the un-excavated area of the greater town.

I must say that twenty years of re-enactment and living history in Australia had given me a jaundiced view of Viking re-enactment. It was the soft option for sword-jockey boys who cared little for the history, let alone for the everyday lifestyles of people they purported to represent. Contrary to the re-enactment paradigm (which still prevails for many societies) in which a token bit of living history is a small awkward appendage to senseless violence, Birka Hereda was a living history society for whom the violence was the minor addition. Hence, being on the very spot where the history happened with such a group did much to ameliorate my views of the possibilities of Viking recreation. That was made all the more seductive by the fact that Birka Hereda’s theme that Summer was food, and they did it very well! 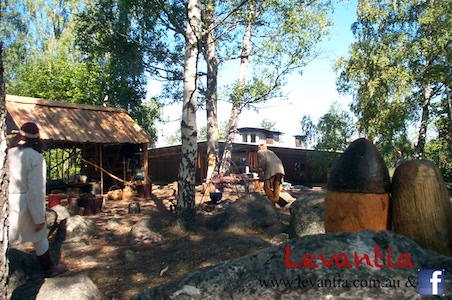 The Viking camp with Birka visitors centre behind. 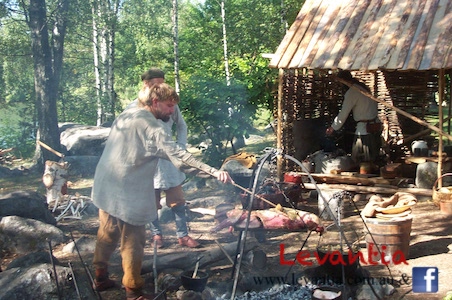 Dinner on its way in the Viking camp. (Grilled lamb basted with herbs and wild garlic) 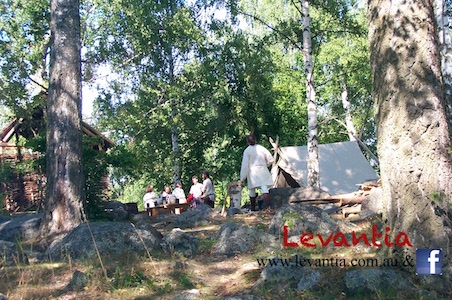 The Birka Viking camp. The author with back to the camera.

Later I moved out to the hospitality of Marielund and the landscape of central Sweden continued to overwhelm me with its charms. So much granite, and half the land area of the entire nation still covered with forest. And what forest it is! I spent days clad in my approximately appropriate historical dress (a demobilised Varangian just off the boat is it, right? 😀) roaming many kilometres, collecting delicious wild fungi and the berries which grew so profusely in so many varieties at the end of Summer. It was a delightful time filled with excitement at the prospect of making a life in Sweden. 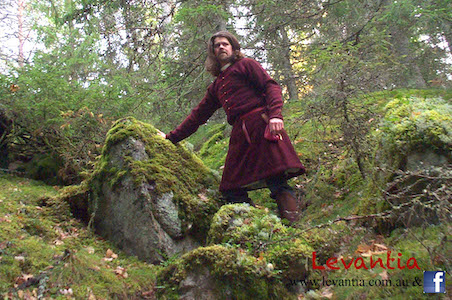 Rambling in the Marielund woods. 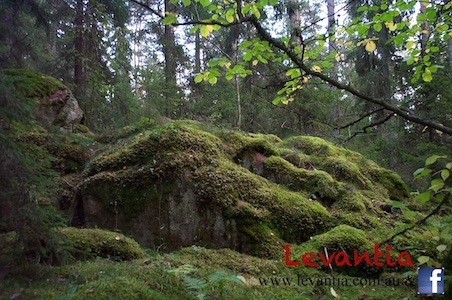 It demands no great imagination to see this forest as the home of supernatural creatures. 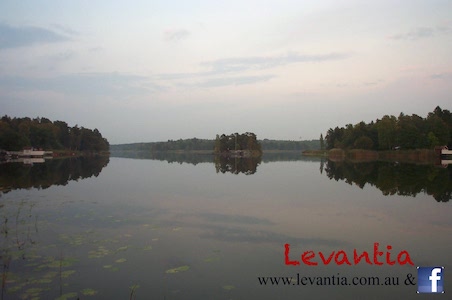 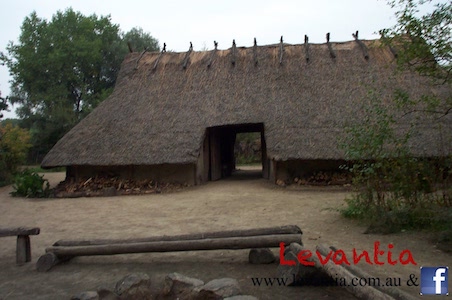 Birka was not the limit of my peregrinations. That period also contained a trip to visit another friend in the Netherlands. Although just a few days, it took in two excursions to see historical recreation venues such as I had not seen before. Eindhoven Open Air Museum was a ramshackle affair, but I suppose they were doing as well as could be expected with little money and relying on voluntary staff. It was quite concentrated, focussed on the Bronze and Iron Ages. 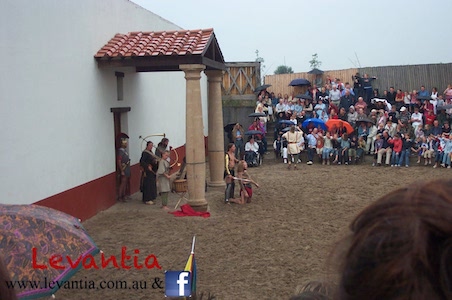 Archeon is an altogether different matter. Much larger and much better funded, it covers the Iron Age through to the later Middle Ages. We happened to go on a Viking weekend, although that offered nothing strikingly impressive, and the only novelty was one rather out-of-place looking Seljuk Turk re-enactor! What was impressive, however, was the range of well constructed buildings, and especially their Late Antique Roman area, which contained a basilica, taverna, bath-house an amphitheatre, and possibly other structures that I have forgotten. Dreary weather did nothing to dampen the enthusiasm of the visitors, or the ferocity of the gladiators,

Thereafter, Life had a surprise in store. Correspondence with a gentleman in France brought the offer of a job. It was to take over the editorship of a new monthly journal, Medieval History Magazine, and the management of the business unit that published it. That business was relocated in Leeds due to the magazine being a joint venture between its founders and the Royal Armouries Museum. Thus, the thing that I had never intended happened, and I came to live in England at the end of October 2003.