On the 31st May 1981 Beverly Lane, Herbalist and Celtic Revivalist, arranged a meeting at her house in Melbourne, Australia of a number of other people she knew to have serious antiquarian interests. This event was a new beginning for historical recreation in Australia. There had been a group established in Melbourne in the early 1970s, the grandly titled “Viking Society of Australasia”, but it had evaporated in acrimonious politics years earlier leaving virtually no continuity. At that first gathering Beverly Lane herself made a comment that the collection of people present was as diverse as those the Varangian Guard might have attracted. No one else of those present knew what she was talking about, but the information that the Varangians were an élite bodyguard of the Emperors of Constantinople caught the imagination of the inaugural group, who promptly embraced the name “New Varangian Guard”. To be properly constituted, the group needed a President, and I was the one who did not step back quickly enough!

As noted, in those days genuine historical knowledge within the founding group was negligible, and most members tended to think of the Varangians as being something like a Viking free company similar to the Jomsvikings, although even about them little was known beyond the name. As president it defaulted to me to be able to answer questions about who the Varangians were and about the state in which they served. That obligation set me on the path of doing historical research, and ultimately to being a Byzantinist. My education had contained the dominant myth of traditional Western historiography – the so-called “Fall of the Roman Empire”. To find that in fact the “afterlife” of that state endured virtually as long as the supposed “real” Roman Empire, and did so against much harsher circumstances, came to fascinate me, as it still does. 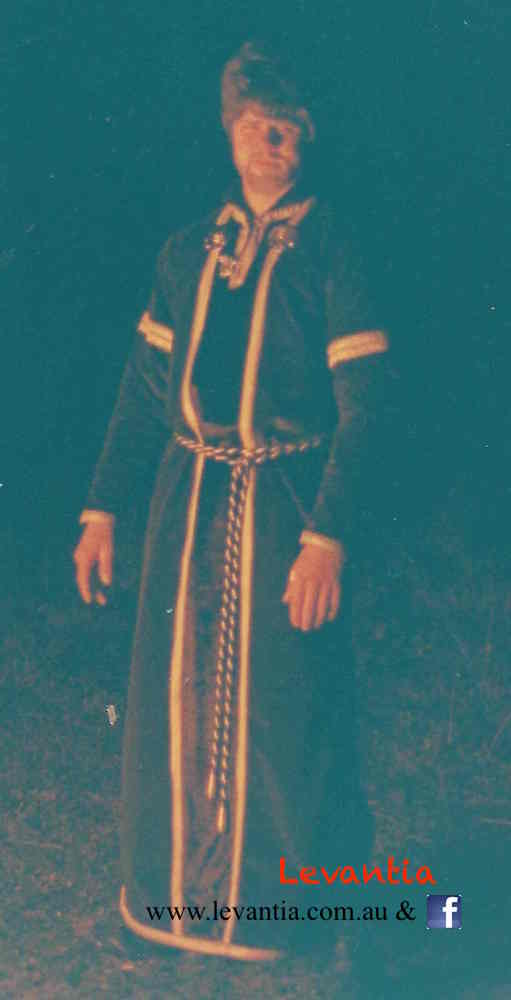 My first attempt at Byzantine regalia, 1982.

Re-enactment is defined by toy-soldierism, and there was plenty of that, but I, and a sufficient number of others in the group, believed that there could and should be more to our activities than mere senseless violence. So not much later than a year into the life of the New Varangian Guard I organised its first grand banquet in the medievalesque hall of the Monsalvat artist commune on the outskirts of Melbourne. The event was a great success. It began with a tournament on the forecourt which entertained not only us and our guests, but also amused some of the kitchen staff so much that as we finished, they donned garbage bags as surcoats and colanders as helmets and emerged to skirmish amongst themselves with tongs, wooden spoons and other utensils, thereby entertaining us enormously in turn! That established a very active banquet culture in the group which lasted for many years.

Early in 1983 I moved away from Melbourne to Sydney to take a job. I rapidly found that the re-enactment groups there, the Ancient and Medieval Martial Arts Society and the Macquarie University “Hackers” (I cannot recall their official name), had little to recommend them. Hence, having relocated once again to the far pleasanter environment of the Upper Blue Mountains, I set out to found a new branch of the New Varangian Guard, thereby setting the NVG on the course that would in time make it the largest and most widespread re-enactment club in Australia. That second branch grew rapidly, and shortly practicality resulted in the members within Sydney separating from the Blue Mountains. The Sydney group embraced the Vaguely Viking mode, while the Mountains pursued a more broadly Eastern focus, albeit embracing Islamic neighbours, rather than the Rômiosi. As the New Varangian Guard expanded, that paradigm prevailed for a long time, with new groups taking either the Vaguely Viking or Islamicate path and leaving me as the group’s token representative of Byzantion for over a decade.

For another account of the development of the New Varangian Guard, see number 59 of the Varangian Voice. 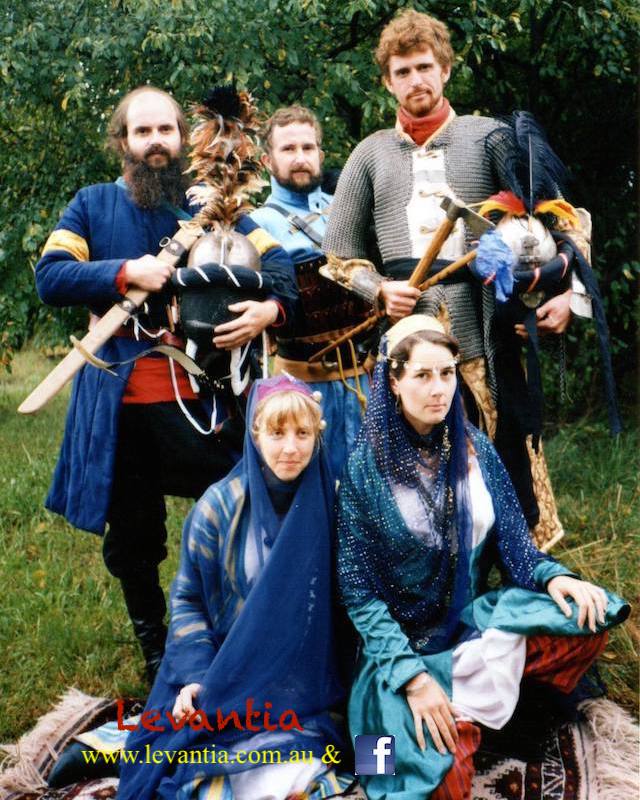 In addition to lacking any persistent prior practice of historical recreation, Australia, of course, has no historical monuments prior to European settlement, which meant that while there were no charming scenic venues, we were also free from constraints of entrenched heritage narratives, the needs and expectations of venue owners, and, indeed, the assumptions of audiences. The freedom from external imperatives or rewards resulted in virtually no re-enactment as it is particularly known in twenty-first-century Britain. There was nothing of “This is battle X and must turn out the same way as the original.”, which meant that almost all combat was competitive, hence generating serious training regimes and the development of military science based on primary sources. Beyond martial pursuits, it also meant that living history was only done by people who really wanted to get inside a lifestyle. Another aspect of my desire to get inside a lifestyle, taking up riding in 1984, can be found chronicled here.

The establishment of widespread historical recreation in Australia in the 1980s was also being driven by a foreign import — the Society for Creative Anachronism (SCA), with which the NVG had cordial interactions from the earliest days. While the SCA had its own realm of senseless violence, from its formation it had imperatives for a wide range of civilian activities built into its structure. I certainly found more in common with some of the people active in the SCA with their passion for hard-core living history and cultural pursuits, than with the toy soldier contingent of re-enactors. Through the 1990s a notable SCA derived activity in Melbourne was what its participants called “Friday Night Fascist Fencing and Dancing”. Those evenings began with Renaissance swordplay training for me and one or two others, then continued with a larger party practicing Renaissance dance. The “fascist” part of the name referred to the fact that all the practice in both sections was built on diligent and academically rigorous consultation of primary sources. 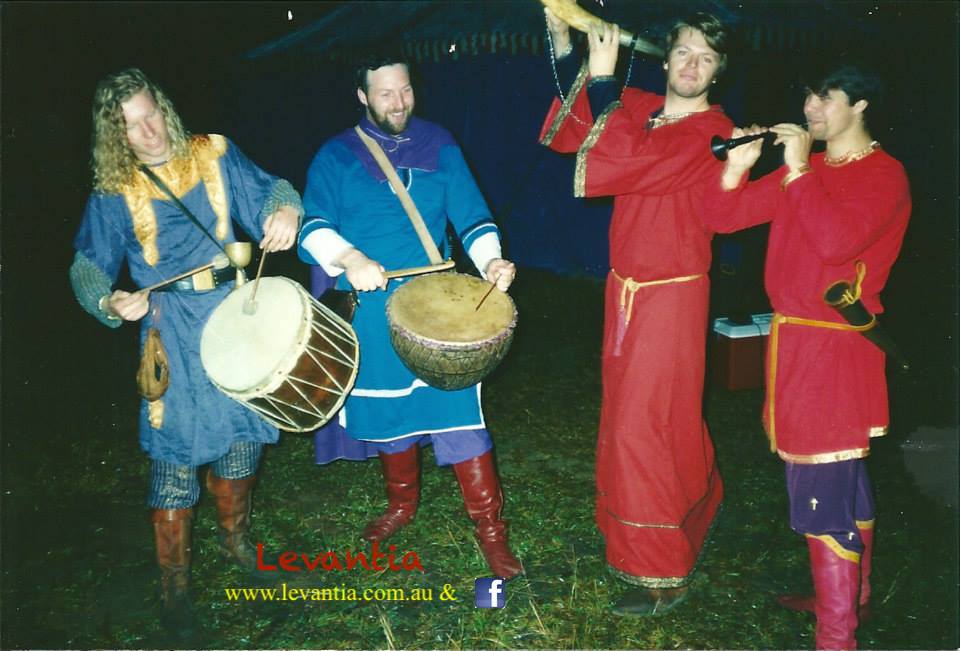 Here I play bombard (right) with other members of ‘Tisiphone’s Children’ led the NVG to the banquet tent at the re-enactment Conferention 1991.

A notable feature of the living history component of the Melbourne branch of the New Varangian Guard from 1989 was a musical ensemble called ‘Tisiphone’s Children’ in which I played a major role. This ensemble was very successful for a number of years, including being commissioned by a local authority to run a research and public education project on medieval dancing.

From 1988 to 1992 I did a degree in Classical Studies, with some Medieval History on the side. The primary elements, of course, due to the fascination with the Enduring Roman Empire that the years driving the NVG had instilled. After the degree, I set out on a Great Adventure, initially with two friends, heading off on a round-the-world medievalist pilgrimage. The first stop was Cairo, then Mount Sinai, Alexandria, and Jordan, taking in a few days illicit camping in Petra. After that my friends and I parted company, having found that our travels were motivated by very different interests. Thereafter, mine pursued a concentrated research agenda. One aspect of that research was to look at what I could get to of re-enactment during the Summer of 1994 I spent in England. I fell in with a now-defunct branch of Regia Anglorum for various and events and activities, attended the Norse Film and Pageantry Society’s national banquet and watched Lion Rampant bludgeon eachother at Berkhamstead Castle. All that did nothing to dispel the impression created before by various accounts, videos and publications that English medieval re-enactment had little to teach Australians.

By the mid-1990s diligent research, manufacture and investment had got me to the position that I could very largely do everything needed through the day and night using reasonable facsimiles of documentable artefacts from eleventh-century Byzantion. Much of the living history equipment shown on the Levantia site were created in this era, and much is still in use, having been well made and not invalidated by later research.
It remains a matter of great satisfaction to know that when doing my preferred presentation, I can be as casual around my camp as I might be at home without blatantly compromising the evocation of a sense of a period of history, as is evidenced by the adjacent unposed pictures. 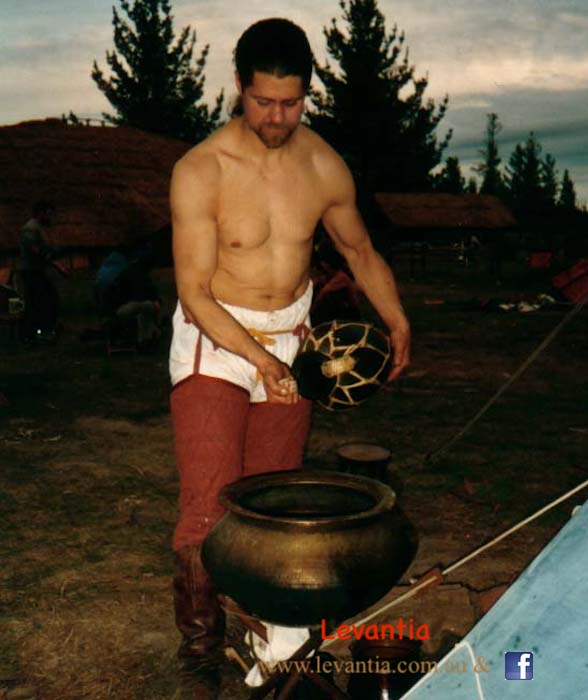 Cannot a man even wash in peace! In the Armidale Pine Forest, 1988. 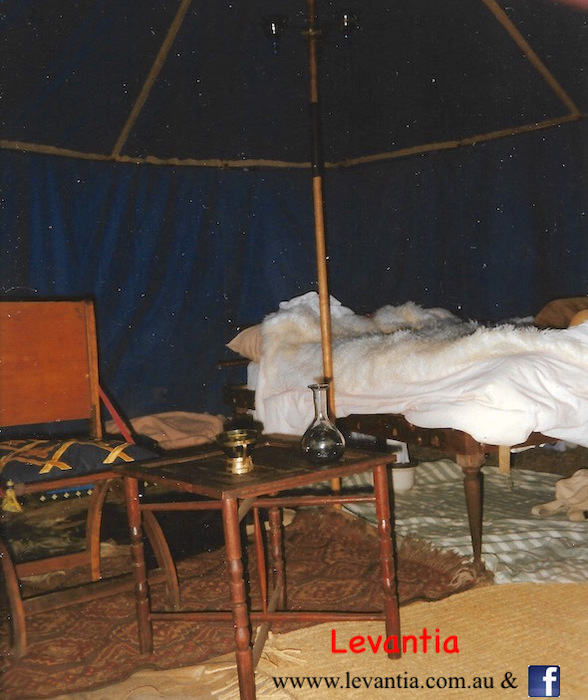 The interior of my first fully appointed Byzantine tent, 1996. 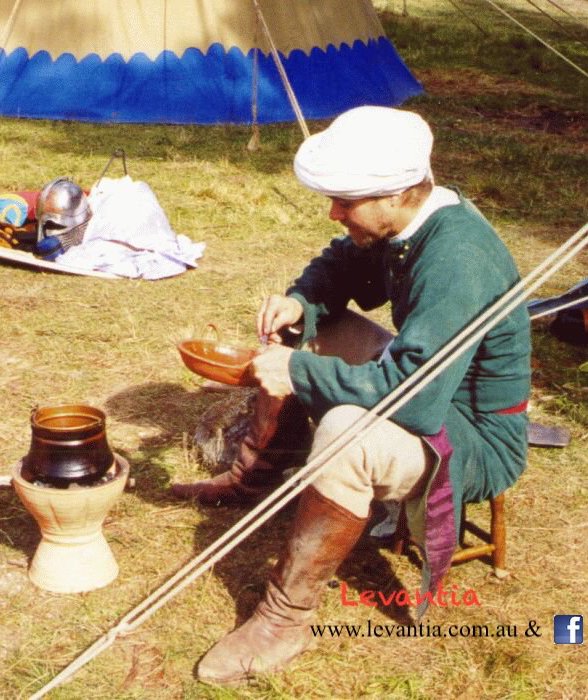 After completing my undergraduate degree I spent a year travelling the northern hemisphere in 1993—4. That trip was mostly devoted to historical research, with the last few months spent in Britain. From the earliest days of the New Varangian Guard, we had sought whatever information we could about historical recreation in England. Frankly, little of the information that came to us created a very positive impression. So once in England I could do nothing but try to get a more direct acquaintance. I fell into the orbit of a branch of Regia Anglorum, attending its weekly meeting (a pub night) and a few events. I also attended the national banquet of the Norse Film and Pageantry Society (now named The Vikings). None of that succeeded in rehabilitating the prior image of English re-enactment! Rather, it confirmed that we in Australia had had great benefit from making a fresh start.

In the early 1990s, more members of the NVG began to take an interest in Byzantion. Ironically, by the middle of the decade that had led to negative politics that resulted in my departure from the group. From 1998 I was at university in northern New South Wales doing a PhD. I started a campus club for living history (Meros) which not only conducted a range of activities on and around the university (mainly banquets and martial arts training), but made a number of excursions to the History Festival at the Abbey Museum (Caboolture, Queensland), and the peripatetic biennial Conferention of pre-colonial historical recreation societies. Staying in touch with more reasonable members of the New Varangian Guard resulted in some worthwhile collaborations at such events. 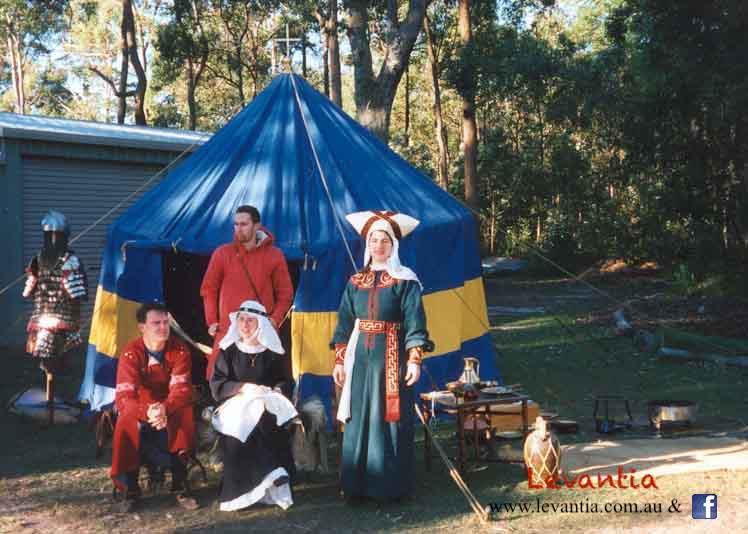 The first presentation of the University of New England Meros at the Abbey Museum History Festival, 1999 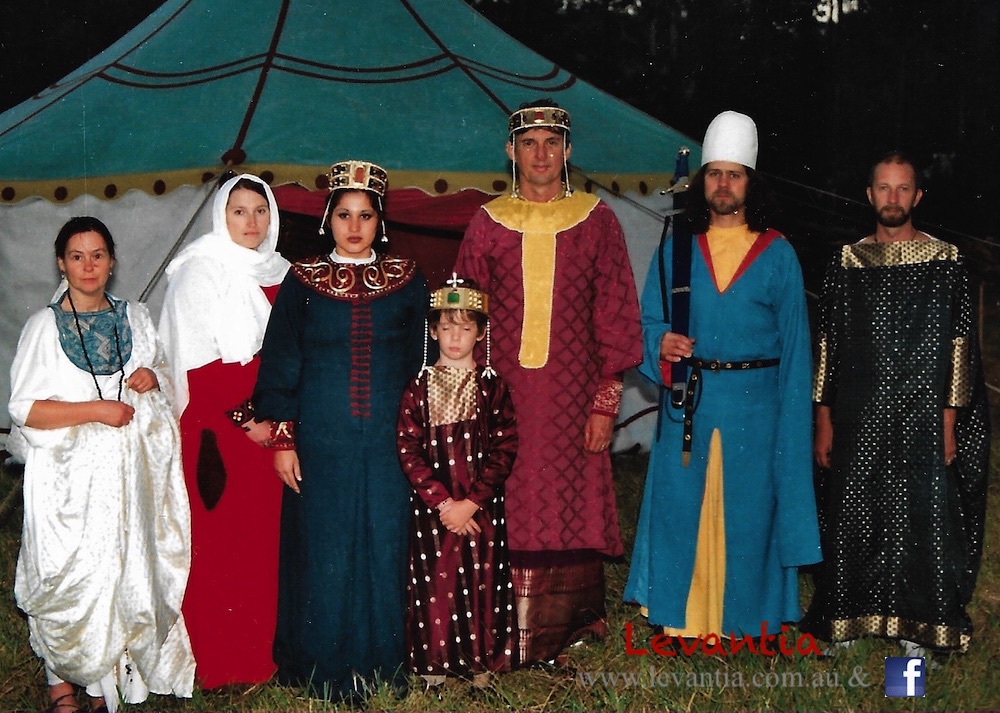 The composite Meros/NVG imperial party at Conferention 2001. The author as Proximos with Stephen Lowe and son as Emperor and Kaisar (Caesar), and Edith Castro as Empress.