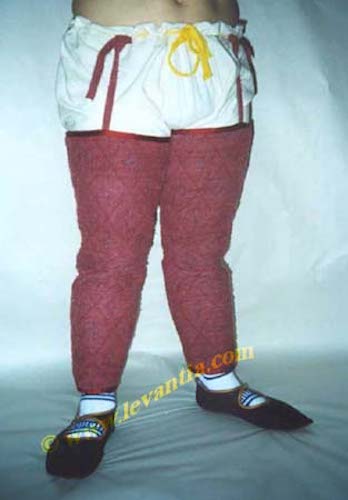 Common legwear from late Antiquity onwards. Breeches, called vrakha (βράχα) or periskelismata (περισκέλισμα) in medieval Greek,(1) had become well established in the dress repertoire of the Roman Empire long before the fall of Old Rome. The practice of wearing very light trousers with thicker leggings over the top had originally been a Persian practice. The term touvia (τούβια) could be applied to both simple hose and to padded hose, which were also called kampotouva (καμποτούβα).

There is a video (new window) showing a way of tying the hose in a manner that is simple and reliable.

The socks, or housia (οὕσια) are some of the earliest examples of true knitting.(2)

These shoes are a version of type which came into use in late Antiquity, and which probably influenced European footwear in the thirteenth and fourteenth centuries. It has been suggested that these should be identified with the term tzervoulia (τζερβούλια).(3)