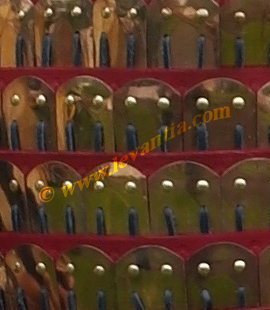 Lamellar is a form of armour very much misunderstood in the popular militaria field, and this observation is most particularly true of lamellar in the Enduring Roman Empire. Following its adoption by the Romans in the sixth century from the migration tribe commonly called Avars, between then and the tenth century Roman lamellar underwent a technological innovation which sets it apart from the sorts of lamellar used by other cultures. The plates of middle-Byzantine lamellar were fixed not to the plate adjacent in the row, but to a backing. This may first have been done by lacing, but from long before 1000 c.e. it was done by riveting as illustrated here in this replica based upon the donor portrait of Proximos Iôannês (see the page on Ceremonial Uniforms). The precise sequence of that evolution is shown in Armour Never Wearies: scale and lamellar armour in the West from the Bronze Age to the nineteenth Century.

Lamellar is discussed in varying degrees of detail in the following publications by the author: