Heavy cavalry of the twelfth century 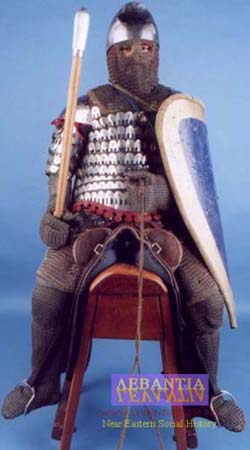 Later sources from around the empire and nearby show that the already-ancient practice of fitting cavalry helms with mail hangings covering all but their eyes continued throughout the period. In the eleventh century we see occasional pictures showing the splinted upper sleeves of the tenth century being replaced by scales, and then later by inverted lamellar, which also came to be used sometimes for skirts. A very few innovations were influenced by the West, such as the mail chausses, and the use of long (“kite”) shields. The historian, John Kinnamos, credits Emperor Manuel I Komnênos with introducing Frankish cavalry methods to the Roman army, specifically mentioning the replacement of round shields with kite shields.1
The “Phrygian cap” helm was a fashion that became very widespread across cultural and religious boundaries in the twelfth century, appearing in Roman pictures as well.2

The saddle is, of course, modern, but less different from a Byzantine one than from a European war saddle of this period. The high European war saddle did begin to be adopted along with other Western cavalry methods in the late twelfth century, but did not become prevalent until the thirteenth century.

Run your mouse onto the picture to see a view from another angle and then off to see detail of the lamellar skirts.