Heavy cavalry of the tenth century 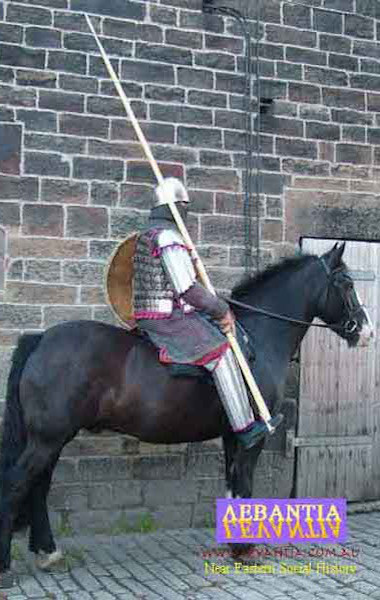 In the Syllogê Taktkôn and Taktika of Leôn the arms and armour available to the troops are listed unsystematically and without any recommendations as to which troops ought to have what. As supply was only semi-centralised and evidently often supplemented out of the trooper’s own resources, there was doubtless considerable variation, with the different classes of troops (light, medium and heavy) merging haphazardly into each other. This reconstruction is based upon almost the most heavily equipped a cavalryman could be. It lacks one item of protective equipment, the epilôrikion, or padded surcoat, for precisely the same reason these are virtually never illustrated in pictorial sources – it would conceal the fact that the man is wearing characteristically Roman body armour of the period.

The Composition on Warfare (“Precemta Militaria”) of Nikêfôros is much more prescriptive about all the soldiers. Kataphraktoi were to wear helms with two layer mail hangings covering all but their eyes, klivania with upper sleeves, most probably splinted, skirts and lower sleeves of padding faced with mail rather than a full mailshirt as shown here, and grieves, again most probably splinted. Nikêfôros also recommends that a katafraktos also carry a mace holstered on each side of the saddle, and one of each sort of sword (spathion and paramêrion) in an arrangement you can see below which allowed ready access to either. Cavalry lances were the shorter kontarion in this period, and apparently still mostly used with the ancient, loose under- or overarm stabbing technique or else two handed, rather than couched in the Western manner. 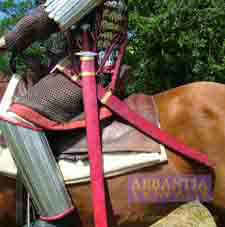 Such panoply was very nearly perfect in terms of pre-gunnery warfare and clearly survived through the next two centuries, where economics permitted. Run your mouse onto the main picture and then off to see the man from other angles.