Manuscripts of the richly endowed middle period from the tenth to thirteenth centuries often show a wealth of useful details when they are not dealing with religious themes. The following collection of musical instruments and ensembles is an example. 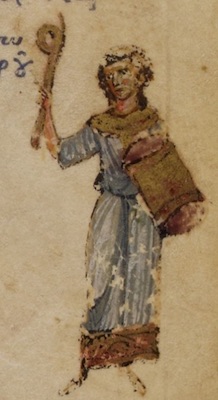 The familiar large cylindrical drum with skins at each end strung with ropes is very common, occurring in eleven of the thirteen playing ensembles cited here, and in the collection of instruments displayed in Kupferstichkabinet, Berlin ms. 78 A9.
Especially notable is the ensemble of two identical drums, one played with a stick and the other with the drummers hands. This strongly suggests a virtuoso contrapuntal percussion style such as is performed by relevant modern traditional groups such as the Georgian State Dance Company.

These are almost as common as drums, appearing in seven ensembles, and two other depictions. They are most often large, and on several occasions played by dancers. 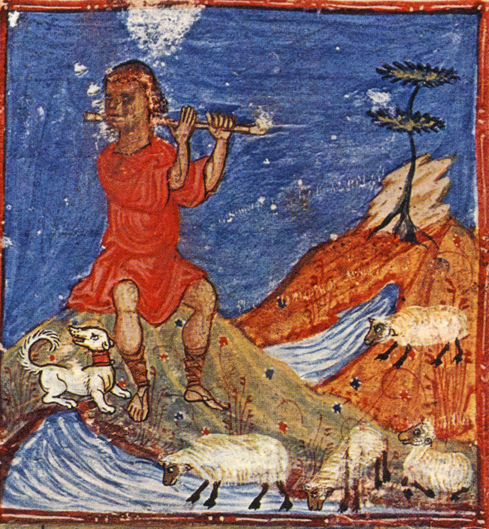 There is an identification problem with these. Transverse flutes are clear enough in two manuscripts, but very much more often we see an end–blown instrument with a straight or slightly tapering bore. These could be fipple–pipes, natural trumpets. They might even be shawms because an exceptionally clear depiction on a persian plate of the eighth century shows that double reed instruments of that period were a straight bore and not the bell–ended of later times.1 Size may be some guide. It would be fair to take the smaller straight bore ones to be six–hole fipple pipe or recorder–type instruments. Use may be some guide. Projecting backward we may infer a shawm in the hands of the snake charmer in British Library Additional ms. 19352. However method of paying does not seem to be much of a guide, for often they appear to held as if being blown like a trumpet even where this would be unlikely in practice, such as the snake charmer already mentioned. The two instruments in the imperial acclamation scene in the Madrid Skylitzes are likely to be trumpets, despite being accompanied by a harp, a thoroughly impractical arrangement on account of the difference in volume. Other occasions where a trumpet is quite likely there are complicating factors. The instruments in the naval battle scene of the Cynegetua seem to have finger holes, visible on account of not being used. Yet it is quite possible that a large shawm might be pressed into service in lieu of a trumpet. Stretching things a little further, we might consider the possibility here of a finger–hole trumpet, like what was called in Renaissance Europe a “mute cornet”. 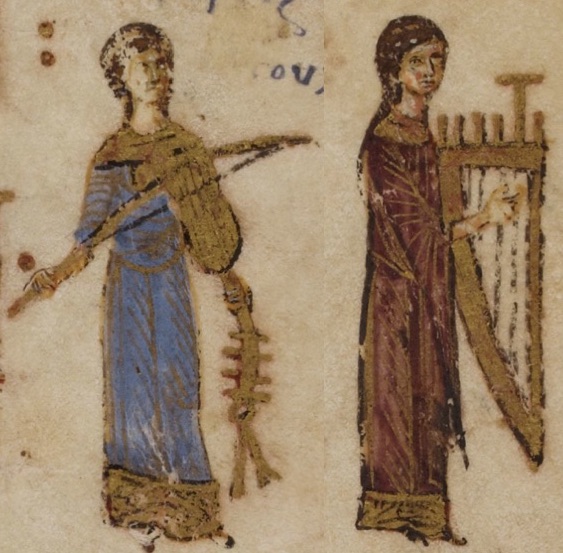 Harps are the commonest stringed instrument, depicted in seven ensembles and the Berlin collection. Eastern harps are of a very different form to the European variety having only two sides, and in the case of the type shared with the muslims the sound–box above the strings.

Fiddles are the next most common stringed instrument, depicted in five ensembles. As early as the eleventh century these show the flat waisted body which is to be so often seen in European sources of the twelfth and thirteenth centuries and which lead to the modern violin. 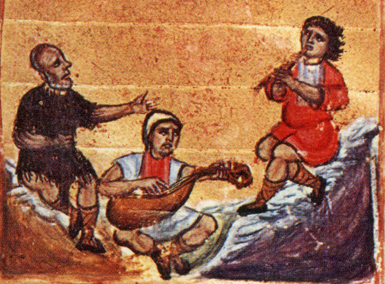 Lutes were probably a bit more common than this sample of manuscripts suggests, only three depictions. Perhaps their strong Islamic associations made them less likely to portrayed.

The collection of instruments in Kupferstichkabinet, Berlin ms. 78 A9 has some very interesting inclusions which are otherwise unknown. The rarity of depictions of organs is curious, since they were a Roman invention of the late antique period. The only other place I have found one to date is in a tewelfth century manuscript in Saint Catherine’s Monastery at Mount Sinai. The kanoun is a large lozenge–shaped plucked dulcimer which has been a staple of Islamic art music for a very long time, yet the name is originally Greek suggesting the Rômiosi may have used this instrument long before this late thirteenth century example.2 The kettle–drum may well be a new invention of the thirteenth century. Besides here, the only other place it occurs is in one illustration of the Automata of al–Jazari. 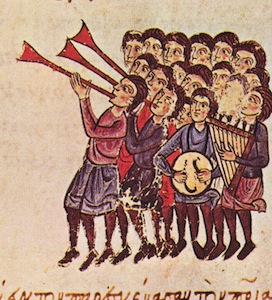 A few peculiarities aside, most of the ensembles shown in middle Byzantine era manuscripts are eminently practical and euphonious. Combinations of harp, fiddle, lute, flute and fipple-pipe punctuated with rhythm from drum and cymbal. Let us hope that musicologists will someday provide us with reliable reconstructions of music to play on them. In the secular realm the Rômaikoi evidently shared an attitude with other peoples of the Eastern Mediterranean region — that music was in essence an aural and improvisational art not to be constrained and formalised by text.

In Western medieval music there is a very well documented practice of exchange of material between the religious and secular areas, a practice called “troping”. I have been told by Byzantinist musicologists that there is some evidence for the same process in Rômania as well. I was prompted to ask this question of them by hearing them perform some pieces which struck me that if accellerated, transposed to instruments and supplied with percussion would be very entertaining pieces.

1: Held in the Iran Bastan Museum, Tehran. Prudence Oliver Harper, The Royal Hunter N.Y. 1978.
2: Farmer, ‘Buk‘, Encyclopaedia of Islam, New Edition, Leiden 1996
3: While the extant manuscript is accepted as having been made around the mid–twelfth century in Sicily (cf. Nigel Wilson ‘The Madrid Skyltizes’, Scrittura e Civilita No.2 (1978) p.14ff), comparisons with manuscripts showing the same sorts of detail (B.N.P. Coislin 79, B.M.V. Z 479, B.A.V. 1851, Sinai 339) confirm that some elements of this manuscript were copied very faithfully from eleventh century originals from Constantinople.