My career in Western Martial Arts

Linked images below will open a new window with a larger picture. 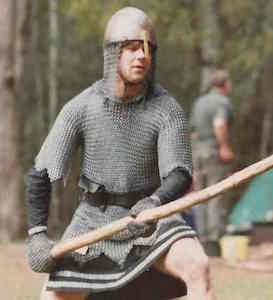 In 1981, our knowledge of material and martial culture in the “Middle Ages” was rudimentary. The author in his first helm and mailshirt.

From the moment I became involved in historical recreation in 1979, it seemed implausible to me that the warriors of pre-Modern eras could really have been as they were (and, alas, generally still are) portrayed by movies — ferocious individualistic brutes who flailed about with great enthusiasm and power, but with no technique or discipline.

Thus, when I found myself charged with the leadership of the newly formed New Varangian Guard at the end of May 1981 in Melbourne I lost no time in setting out to reconstruct a body of technique, and to establish systematic training methods.
At that time, the great wealth of late medieval fight-book literature that has since been ferreted out by so many keen researchers was scarcely hinted at by the few Marozzo illustrations reproduced in Hutton's Old Swordplay. My method, therefore, was to reverse-engineer technique from my prior experience with modern fencing, comparing the results with the actions represented in the better and more plausible art sources of the time. Foil technique transferred very readily, and very effectively, to spear. In contrast, while the sabre was well known to be a weapon of considerable vintage, it was clear enough that there must have been considerable changes in technique in modern times, primarily through the effects of the weapon having become so very much lighter, and as a result of the imperatives of competitive sport fencing.
The modern version of the use of a shield, joining a riot squad, was not readily accessible, and in any case, the conflict situations, riot control and hand-to-hand combat against a well armed foe, were not all that comparable. Yet here too, it seemed self-evident that there must have been technique for shields as well — technique for gaining the best coverage, for minimising the obstruction of vision, and for minimising the damage to the shield where possible.

In early 1983 I left the NVG of Melbourne to its own destiny and moved North, settling in Katoomba in the Upper Blue Mountains towards the end of that year. Not long afterwards I started a composite entity to continue my pursuit of historical recreation, one face of which was a branch of the New Varangian Guard, and the other face a household called “Januskeep” within the American derived group, the Society for Creative Anachronism which had become established in New South Wales a couple of years earlier.

With an enthusiastic crew assisting me, I continued the research, experimentation and training. By 1986 I felt I had a sufficient grasp that I begin to codify a good range of technique, and formalise the training. 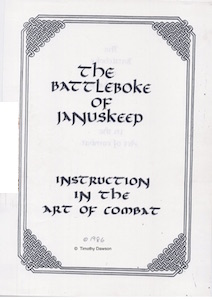 The codification appeared in the form of a manual entitled The Battleboke of Januskeep. The contents comprised:

Almost 20 copies sold, one even going as far as the United Kingdom! The proof copy available via the link has my annotations towards a revised second edition, although some of them, and other second thoughts about the techniques advocated in the Battleboke have been themselves superseded by both further thought and the now more copious historical evidence. 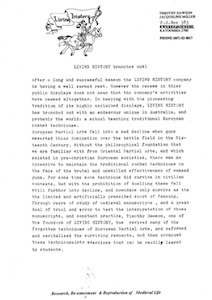 One of the things that deferred a second edition of the Battleboke was the formalisation of training embodied in the project to establish the AMYNA School of Defence. Weekly training, a uniform, and gradings were enthusiastically embraced by a dozen regular students. Each grading exercise was conducted twice, once in the controlled conditions of the Palaistra (training hall), and once in an outdoor location chosen to test footwork and situational awareness. Grades were displayed by coloured bands around the upper sleeve of the uniform after the medieval fashion.
Once a basis of proficient footwork was attained, (the first grading) students went on to learn techniques for the suite of arms set out in the Battleboke: single-handed sword; sword and shield; two-handed sword; two-handed spear and pole-arm.

The high point of AMYNA’s activities in 1986 was November 22nd, when the Sydney Japan Week festivities culminated in a martial arts extravaganza at the Town Hall. Amongst presentations of archery, judo, karate, kendo and music, we presented a demonstration based around the arrival of the first embassy from the crown of England to Japan which reached there in 1611. Our demonstration incorporated set exercises (“katas”) and free sparring with pole-arms, sword and buckler and two-handed sword. 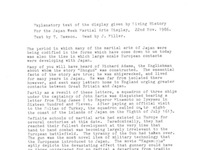 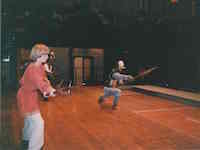 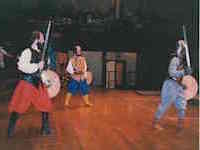 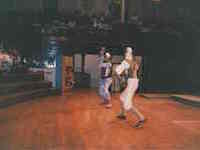 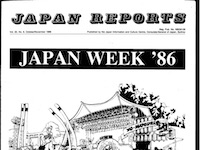 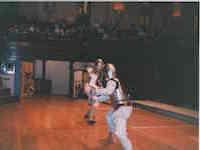 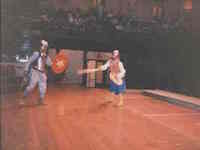 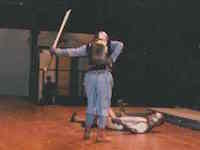 1987 was the pinnacle for my activities in the Blue Mountains, and my last year there. It was a great year for cavalry activities, (see the equestrian page). ANYNA continued to flourish and had some high profile outings.
One memorable event was a demonstration in the interval at a major Tae Kwon Do tournament ion Western Sydney. The organiser, Tiger Kim, “Master of Korean Ninjitsu”, was firmly of the opinion that it was not possible to freely spar with weapons. Evidently our presentation did not convince him otherwise as afterwards his only comment was “For a good show, you must use kicks”! There seemed little point in explaining that using kicks in our style was likely to get one’s leg cut off! Other attendees were more congenial. We got on well with the Chinese martial arts contingent, spending a fair amount of time comparing notes on sword and shield techniques.

Late in 1987 I moved back to Melbourne, and from the beginning of 1988 embarked on a university course lasting five years. From then to my departure from Australia in mid-2003 following the completion of Phd study, my European Martial Arts research, training and teaching continued in the more flexible manner in which it had started, principally in the context of medieval re-enactment. The first year of that period produced an article on a subject that has become quite trendy with some people in much more recent times. Pankration: the Original Martial Art, Varangian Voice, no. 11 (June 1988). The last five years during my Phd study were somewhat more systematic as I regularly trained a keen group of students in the context of the university club I had formed.

By that period, of course, we had gained the benefit of many developments in the HEMA field, primarily the discovery and dissemination of some of the manuals that had begun to be written in the late Middle Ages and Renaissance. I was gratified to find that such manuals rarely contradicted the conjectures and conclusions that my practice had generated, and as time went on and more came to light, things invalidated by one author could be found approved by another. George Silver was one author who came early to my attention, and once a feel for the technicalities of his writing was achieved, I developed a great appreciation for his good sense and pragmatism. He provided one resolution to a question which long vexed me in the free sparring we did in re-enactment - Why could incompetents hit me? Not often, but more often than I thought they should. Silver’s answer was a welcome relief: “insert quote here”. I also came to realise in due course that so may years of training others can produce a tendency to fight down to their level in order not discourge students, a habit that can be hard to transcend when in a more competitive mode. 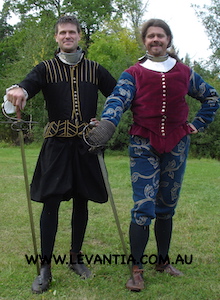 With Arnold Pears at the Aros HEMA Weekend 2008.

Following the completeion of my doctoral study I came to the Northern Hemisphere, and renewed my acquaintance with an old research and sparring partner for Melbourne, Dr. Arnold Pears, who was now settled in Sweden. Arnold took to runnning an annual WMA weekend camp at which I was a regular teacher in its first decade. Taking the subject to a wider audience, I published ‘Trip up his heeles: self defence in Renaissance Europe’, in Medieval History Magazine, no. 10 (June 2004), pp. 34-41. Download a PDF copy. 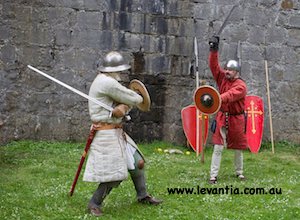 Occasionally re-enactment offers the chance to cross swords with a skilled opponent.

While practice had tailed off somewhat, I continued research, leading to the article ‘The Walpurgis Fechtbuch: an inheritance of Constantinople?’ (Arms and Armour, Royal Armouries Museum 2009 PDF file) looking at graphical evidence for systematic martial arts in the West prior to the earliest insctruction literature. I explored the Art History facet of this theme further in ‘Windows on the Wars: the Case of Martial Depictions in Middle Byzantine Ivories.’, when invited to present at the second Kracow Symposium on Byzantine Art and Archaeology, Μίμησις in Byzantine Art: Classical, Realistic or Imitative?, in 2012. I elaborated the WMA aspect of the subject in ‘Before the Fight Books: Identifying Sources of Martial Techniques in Antique and Medieval Art’, when I was part of the editorial team for the first scholarly collection on HEMA: Late Medieval and Early Modern Fight Books: Transmission and Tradition of Martial Arts in Europe (14th–17th Centuries), with Daniel Jaquet and Karin Verelst (eds.), E. J. Brill, Leiden 2016.

The Will Adams Festival

In September 2019 I had the opportunity to speak to the populace of Medway, Kent at the festival commorating the life of the local man, Will Adams, whose sojourn in Japan early in the seventeenth century led to modern works such as Shogun. (Wikipedia entry) I discussed a few elements of HEMA — self-defence, two-handed sword, single-handed sword and parrying devices, and contrasted them to Japanese practices of the time, concluding with the influence Western martial methods had on the Japanese. The video is an extract on self-defence.