Some helmets used by Roman troops 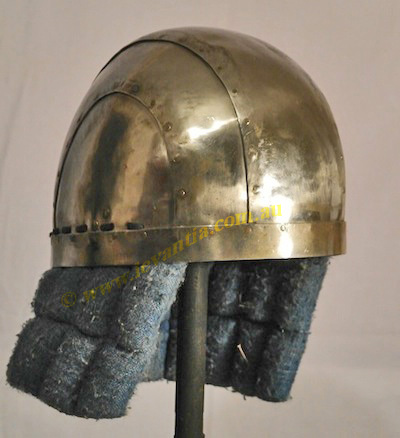 A modest modification of helms in use in the fifth century,1 this type of helm continued in use into the twelfth century due to its ease of construction. It has the advantage of being naturally head shaped (that is, oval) when assembled.2

Middle Byzantine and quasi-Byzantine art often shows such helms as having a panel of neck protection vertically striated and sometimes also divided in various ways horizontally. Many people interpret these as pteruges or scales. While that is possible, the heavy used of padding by the middle Byzantine military suggests such material as an interpretation which in practice is more comfortable and at least as protective. This interpretation is supported by one very unusual picture which shows a helmed man from three-quarter face whose helm hanging is particularly thick. 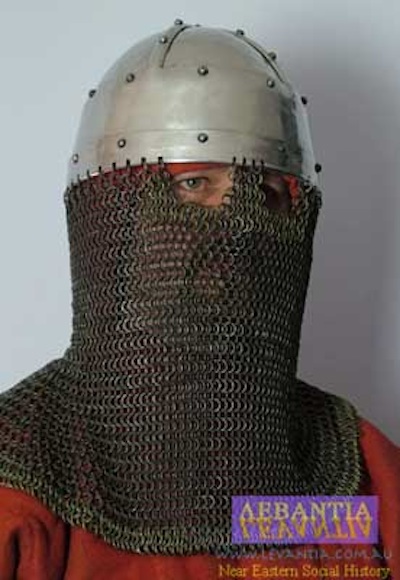 Another example of what seems to be a distinctively Roman style is the tenth-century helm found at Yasenovo in Bulgaria. Its horizontally divided construction is corroborated in the Madrid Skylitzes manuscript and others actually from Constantinople, while the reinforcing ridges offset from the centre line remind one of the innovations applied to Roman infantry helms in the third century to counter the effects of the Dacian falx. The mail hanging is supported through the slots by a wire running around in side the rolled brim in the same manner as some surviving Caucasian helms (See below). The replica has closer slotting than the original. As is further discussed elsewhere, this type of mail hanging is characteristic of heavy cavalry helms. 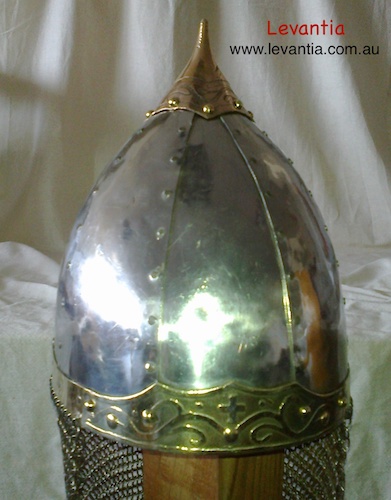 As the Age of Migrations commenced different styles of helm construction appeared from the East. By the tenth century minor variations of this type were in use all over Eastern Europe and the Caucasus (hence they are known as “Caucasian helms”). Numerous examples survive across that region,3 and it does appear in Byzantine art.4

With only one known surviving example, and helms being so rarely depicted in detail in Byzantine art, the frequency of them being decorated, and what decoration might have been on those that were so treated is entirely uncertain.