Weapons of other nations in the tenth to twelfth centuries

Other periods and regions.

All the replicas shown on this page were made by Timothy Dawson. All are fully functional arms designed for recreational combat.

The Vikings were clearly obsessed with swords, and considered the possession of a fine sword to be almost an essential pillar of identity. In the pagan period warriors were often buried with their swords, and the wide-ranging adventuring of the Vikings across Europe resulted in in many finds from random losses as well. As a result, we know more about the form of Viking swords than for those of any other people or period of the ancient and medieval worlds. Each picture below is a link. 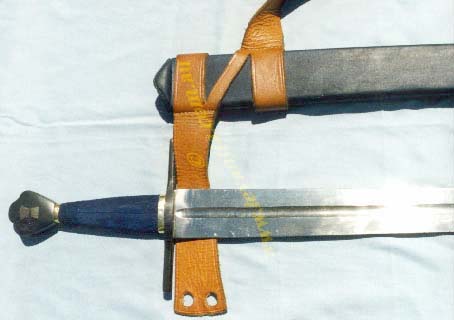 As early as Viking times there are accounts of warriors grasping the pommel of their swords in their left hands in order to strike with greater force. In the twelfth century this had become a definite trend. The weapon was lengthened in both blade and handle in order to facilitate this technique, while being maintained at the same weight in order to allow it to still be used in one hand. This sword is an example of such a “hand-and-a-half” or “bastard” sword. It has a sheaf of grain inlaid into the pommel as a badge of the type that begins the process that created heraldry by the late thirteenth century.

It is a common misconception that swords of this type were heavy. In fact, surviving examples are in the range of 1.15 to 1.25 kilograms (2.5-2.75 pounds), a weight that allows very dexterous use.

As shown above, Vikings treasured highly ornate swords. Their Norman descendants, who influenced the culture of France and large swathes of the Mediterranean almost as much as England, were not quite as vain about their armament, but still valued beauty as well as functionality. This sword mixes that preference with piety by having a Jerusalem cross inlaid in silver into the blued steel of the pommel. 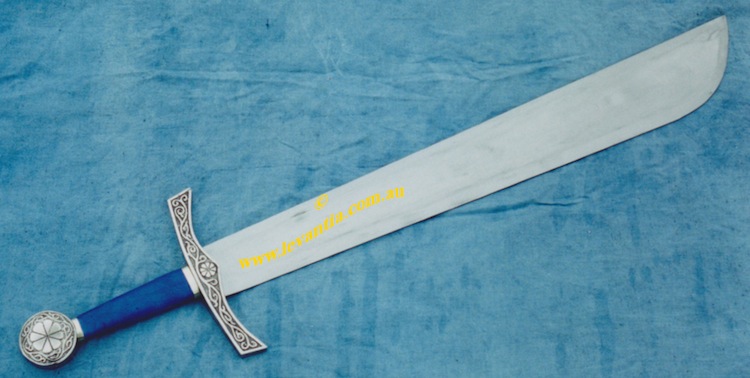 A conspicuous exception to the light and dexterous type of sword described above was the falchion, a large, machete-like weapon. It came into use around the middle of the thirteenth century. One example survives from that era, the so-called “Conyers Falchion” upon which this one is loosely based, and they are well illustrated in thirteenth- and fourteenth-century sources, such as the so-called “Maciejowski Bible”.

A sword of al-islamiyya

Since the fifteenth century the popular imagination has seen curved swords as the emblem of the muslim warrior. In reality, muslims at the heart of the Levant, that is to say, Arabs, Persians and so on, were much later in adopting curved swords than the Romans. They did not begin to do so until the Seljuk Turks became an increasingly influential force in al-Islamiyya from the eleventh century. Even after that the sabre never fully supplanted straight bladed weapons.

The fine structural details of this saif are based upon the traditional form of the southern Arabian Peninsular, but swords of the style, with long grip and no crossguard, are shown in manuscript pictures of the early Crusades era.

Weapons of various periods and nations

The larger pictures of all of these arms are on one page, but each picture below is a link to that segment of the page.