Dining with Angels: cuisine and dining in Rômania

This article, written by Henry Marks, who has published several books on this subject (see at the bottom) was originally published in Medieval History Magazine, vol. 2 no. 1 (2004).

The Eastern Roman Empire, or “Byzantine” Empire as it is nowadays called, existed from 330 to 1453CE. In western and southern Europe literally dozens and dozens of medieval cookbooks exist, many of which have been translated into English. No such Eastern Roman cookbook or organised set of recipes has apparently survived. Culinary information from the 1100 years of the Eastern Roman Empire is scattered, and until the past decade or so, the vast majority of it had never been translated into English.

While a few references have been translated into English and published, the vast majority have not. To address this situation, I have translated, or had translated, the work of Simeon Seth, the Prodromic Poems, portions of Koukoules’ Byzantine Life and Civilization, Jeanselme and Oeconomos’ ‘Byzantine Cuisine and Dietary Recipes’, as well as Hierophilos’s dietary Calendar (Marks, Byzantine Cuisine). Andrew Dalby’s recent book offers translations of several additional short texts, but three of the four translations involve compilations of different editions or texts.
The books of Orebasios (a fourth–century physician) provide a compilation of information from a variety of earlier writers about foods. One can most likely view Oribasios as a transition from Rome to Constantinople.
Anthimius was a sixth–century physician who was forced to leave Constantinople. He lived in Gaul and wrote the short dietary work to Theuderic, King of the Franks.
Simeon Seth was a eleventh–century physician to the Emperor, who late became a monk. His list of foods is the most extensive of all the primary sources, although he provides very limited information about how to prepare them.
The Prodromic Poems are a set of four satirical poems from the eleventh century, which poke fun at a wife, the clergy, and the economic value of scholarship. While they provide information about the food of the eleventh century, the recipes should be treated with caution, as they appear to be parodies, much like that of Trimalchio’s feast.
Hierophilos was a thirteenth–century physician according to the surviving manuscripts of his work. He provides a dietary calendar of the year in which he specified what foods to eat, what not to eat, the number of baths to take and whether sexual intercourse is appropriate in that month.
Phaidon Koukoules’ five volume set, Byzantine Life and Civilization, has never been completely translated into English, although brief excerpts and references to the work exist in a large number of other texts. Koukoules was a very prestigious scholar and author. He had access to many materials not readily available to other scholars, but even he admits that he was not always able to fully understand some of the medieval Greek writings.
Sponsored by Dumbarton Oaks, a large number of Typika (rules which govern the various daily activities of a monastery) have been translated and are available in a five volume set. A number of these typika provide information regarding the food and its preparation of the monks on both feast and fast days.
Information on behavior during a meal, as well as table types, settings and silverware is limited, but does provide some hints as to where and how some Eastern Romans ate, with what type of utensils and displaying what sorts of manners 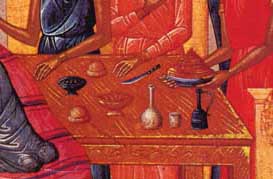 Detail of a fourteenth–century nativity scene. 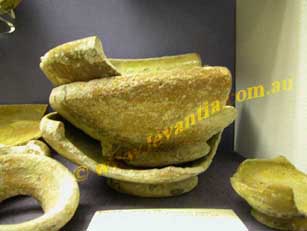 Bowls from a twelfth–century shipwreck. 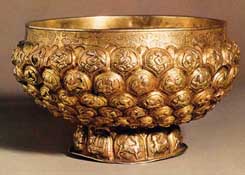 A golden bowl of the twelfth century.

While some sources indicate Byzantines ate three meals a day, there is sufficient disagreement among the experts to make that little more than a hypothesis. One of the difficulties in making this determination is that there were a variety of words used for the different meals. Words used at one time for lunch might at a later time indicate an early dinner. A meal in wealthier homes usually followed the Roman custom of appetizers, main course and dessert. The number a variety of each of these courses would naturally depend on the wealth of the individual and the type of occasion.
The early dining “seats” for the upper classes and nobility were the couches of Rome In the Triklinos, the Emperor’s State banquet chamber, there were nineteen couches— two rows of nine, with the Emperors couch at the head. Each of these couches was reportedly able to hold twelve people. By the sixth century both couches and chairs are reported. By the tenth century, the preference has shifted to chairs, although couches were used on special occasions. By the thirteenth century, chairs were the standard. For the common folk, stools or benches were often available and when not, the ground was the available seating. For the wealthy, chairs might be constructed of wood, ivory, silver, gold, or some combination of these materials, they were often very elaborate.
The earliest tables were small circular or D–shaped ones. These were the most functional when dining from couches as they allowed immediate access to the foods of the individual diner, who rested on his left arm and could only grasp food with his right hand. Later tables became rectangular, although it is not clear when this change occurred. Tables for the rich, like chairs, were often made of precious materials. Small circular table were the most practical for peasants since they most often ate from a single bowl in the middle of the table.
Table coverings were also very common for the rich, although they could also be used to make a statement about a diner’s status. To eat at a place without a table cloth might be considered similar to eating “below the salt” at a Western European noble table. The use of some sort of hand towel or napkin is reported throughout most of the Byzantine era, and in iconography, having one tucked through a person’s belt was a signifier of gentility. Both hand towels and table coverings were made of the finest materials the individual might afford. At least at one time the Emperor was reported to have table coverings of golden cloth. Hand washing before and after meals was also quite common, suggesting that Byzantine ate with their hands. 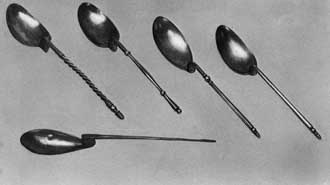 Late Antique silver spoons. Wear patterns on some surviving spoons in the British Museum indicate that they were used with ceramic as well as metal tableware.

Although commoners in the Enduring Roman Empire may have eaten with their hands, spoons and forks are repeatedly shown in icons and many exist in museums today. Spoons were in use from at least the fourth century, while a single report suggests a single tined for was also used in the fourth century. The number of tines increased over time, with a report of a five tined fork in the eleventh century. Knives are notable from their absence in descriptions and in icons, yet they are extremely well represented in archaeological finds, so those absences may be simply because they were too prosaic. Utensils were made from wood, bone, horn, ivory and metal. The wealthier the individual, the more, expensive and elaborate the utensils. The degree to which utensils versus hands were used is unknown. A thirteenth–century priest provides a list of appropriate and inappropriate manners at meal time. His statements about the use of hands, the Eastern Roman preference for lukewarm foods, plus the pre– and post–eating hand washing have led some individuals to conclude that spoons and forks were primary for display rather than for general use.
For most poor individuals, dishes were wooden or pottery. For the wealthier, gold, silver, copper, tine and even glass were more common. Decorations ranged from ceramic coatings to various types of inlays, including enamels and precious stones. After the twelfth century, most of the dishes which have survived are pottery. This may be, in part, due to the theft of valuables during the Latin conquest of Constantinople. It may also reflect the declining power and influence of the Eastern Roman Empire. Serving dishes ranged from plain wood to extremely costly, highly decorated pieces. Enormous serving pieces were found in the Emperor’s formal dining room. The Bishop of Cremona described a major feat in these words:
“…everything is served in vessels, not of silver, but of gold. After the solid food is brought in on three golden bowls, which are too heavy for men to lift and come in on carriers covered with purple cloth. Two of them are put on the table in the following way. Through openings in the ceiling hang ropes covered with gilded leather and furnished with golden rings. These rings are attached to handles projecting from the bowl, and with four or five men helping from below, the are swung onto the table by means of a movable device in the ceiling and removed in the same fashion.’
The East Romans distinguished between meals and symposia or banquets. Symposia were parties at which drinking and conversation flourished. Symposia started in ancient Greece, but gradually changed in early Roman and later times so the difference between a banquet and symposion become blurred. Proper women did not attend symposia. When women did attend, they were most likely entertainers of one form or another. One of Emperor Justinian’s laws allowed the husband of a married woman to leave her if she attended a symposion,. Some symposia became extremely rowdy, with practical jokes and obscenities common. Justinian II ended some of his banquets by having his enemies executed.
One of the more curious aspects of banquets was the giving of gifts. Among the wealthy the host would often give both leftovers and expensive gift to guests. Some individuals may have help support themselves by being guests. Gift–giving occurred in both direction since in many cases guests brought presents for the host. Guests at banquets were not of friends and important individuals, but were also supposed to include the poor and churchmen. The former were invited as examples of Christian charity. This is substantially different than Western Europe where the poor where often given the leavings of a feast but were not likely to be invited to sit with the Lord of the manor.
Meals were primarily family affairs. Both sexes often ate together and guests of either gender might join them.
We have one primary source who details manners at family gatherings. Bar Ebraya, a thirteenth–century priest discusses the place of prayer at meals and when to wash (before and after meals). He describes exactly how to take food from the common bowls (“do not take food from the center of the bowl, but from the sides, to avoid putting your hand deep into it”), If Bar Ebraya’s recommendations were standard practice at meals in the Eastern Roman Empire, etiquette standards were quite high. Without additional confirmation it is not possible to conclude his standards reflected common practice.