A country girl out of her depth.

Evfimia Kekavmena was already exhausted as the day began. It was the culmination of two months of whirlwind change that had seen her plucked from the quiet, orderly seasonal routine of her parents’ estate outside Nikaia and not only thrust into the teeming streets of Konstantinopolis, but cast into the social intricacies of the Great Palace itself. Was it any wonder that she had not been able to sleep? 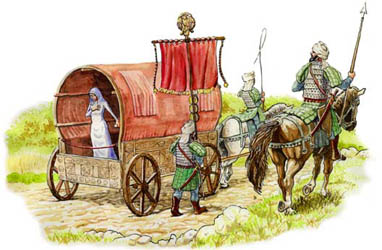 When a Herald from the capital had arrived in her home town she never imagined for a moment that his message would affect her. The announcement declared that the new young Kaisar was in need of a wife, and called upon the eminent families of the district to present their most eligible daughters for his consideration. Although Evfimia was eligible enough, and, being on the verge of turning sixteen, was by all normal custom in need of a husband, she knew that her parents would never deem themselves, or her, to be of a status such as to present for the Imperial Bride Show. This was a state of affairs which caused Evfimia no disappointment. 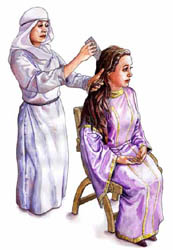 Her closest friend, Theoktista, was another matter entirely. Her father already attended court from time to time and held the rank of Patrikios, and not only was she enviably beautiful, but she had received more than the usual education with her reading taking in not only the normal Scriptures and church fathers, but also some of the great classics such as Homeros and Thoukydidis. Evfimia was not at all surprised when Theoktista was given the apple. Her happiness for her friend soon turned to dismay when Theoktista insisted that she could not face the Great City without her dearest companion. Scarcely had a week elapsed when Theoktista and Evfimia were swept up in a royal cavalcade of ornate carriages staffed by fussing eunuchs and accompanied by palace guards in their shining klivania and resplendent parade epilôrikia. Since then had passed a dizzying round of church ceremonies culminating in the wedding and Theoktista’s coronation, banquets and, most taxing of all, instruction in the intricate ceremonial that governed the life of the palace. From the outset Evfimia had hoped that it would be temporary, and that Theoktista would become sufficiently at home that she would let her return to her parents and quiet of the Nikaian countryside. Theoktista had indeed adapted very swiftly to her new life, but that had simply led her to hatch a plan that would entangle Evfimia all the more firmly in the coils of the court. Theoktista would make Evfimia her Zôsti Patrikia, her most eminent lady in waiting, and a rank above every man at court except those of the immediate royal family. Evfimia would keep this rank for life, even if Theoktista herself ceased to hold her position for any reason. And today was the day it would happen.

Preparing for an appearance at court was always a painstaking task, and today more than ever. Evfimia sat with weary patience as her servants gave her thigh–length hair a preliminary comb and braiding. She had the luxury then of taking a light breakfast. The butterflies in her stomach did not allow her to eat much, just some spiced apricots and grouta, washed down with some heavily diluted wine scented with rose–water. With the bulk of the morning still ahead, she insisted on going to the palace baths. This was one aspect of palace life she did like. At Nikaia a trip to the real baths was a luxury only to be enjoyed weekly if that. Here she could go daily if she wished. All that hot water and massage did much to prepare her for the ordeal ahead.

Paradoxically, the eunuchs insisted that she began this venture to court dressed rather more simply then usual. Her dress was one of the plainer, looser ones she now commonly wore for confort around her chambers. Such comfort was of little avail, however, once the ceremonies began. Evfimia was glad that she was not required to say very much, for she scarcely thought she could putt two sensible words together. The proceedings passed in a daze, as she was paraded this way and that, passed from Praipositos to Ostiarios and back again, present to the senate and the army staff and a host of others.
Two moments only stood out. The first was when the Praipositoi had taken off her dress and replaced it with the stikharion that was the formal dress of a Zôsti Patrikia. At home Evfimia had owned one silk dress, worn only on the most festive occasions as a change from the usual wool and linen. Since coming to the City she had almost come to take the weight, lustre and texture of the brocaded silk dresses she now wore for granted, yet this was different. Its gold bands running from shoulder to hem were grand enough, but they lay upon a fabric all of the finest sea–purple! No one else but the Emperor and Empress themselves was allowed to wear such a garment all of the True Purple. 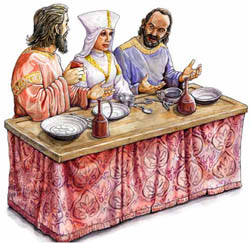 The other memorable part was when the other ladies of the court had filed past her one by one to receive a gift from her hand and she had then gone to make a donation of twelve nomismata to the church. She had no idea that so much money had existed in the whole world, and still less where this had come from.

But at last it was over, and she had a couple of hours to recover before the evening’s banquet. This was one of the strange things about her new position. Never again would she be invited to an imperial banquet, or, indeed, excluded from those normally attended only by men. Instead it would be her right, if not obligation, to take a seat just two places from the couch of the Despotis. How she endured those hours in the Hall of the Nineteen Couches, stuck between the Emperor’s brother and some general or other as they persisted in taking about hunting and battles through her, Evfimia could never quite recall, but at last she could leave and make an utterly weary journey back to her rooms. Even her apprehensions about future banquets and whatever else her new position would entail could not keep her awake after such a day.

Kaisar – from the Latin, Caesar (which is pronounced the same way in Classical Latin), in this period the deputy emperor.

Patrikios – Patrician, another survival of Old Rome. The rank of <>Patrikios was the lowest honourific rank in the Constantinopolitan court.

Klivanion – torso armour made of lamellar.

Epilôrikion – a heavy outer coat with openings in the armpit which allowed more freedom of movement than when the sleeves were used. originally a military surcoat.

Grouta – a sweet gruel with honey, carob and dried fruit.

Stikharion – a garment distinguished by two stripes of contrasting colour or decoration running vertically down the length of the garment from shoulder to hem.

Nomisma – the gold coin of the empire. 1/144th of a pound weight. Daily transactions were normally conducted with the copper coin called folis which were likewise worth 1/144th of a nomisma.

Despotês – one of the Greek terms for emperor, the other being Vasilievs.

Sources
Based primarily upon the Book of Ceremonies.