Governor of the city

The regalia of the Eparkhos t&ecircs Pole&ocircs, or Governor of Constantinople, in the tenth to twelfth century has the distinction of being the most precisely described and most precisely depicted ensemble of all Byzantine regalia, except, perhaps, that of the Emperor himself. Its state in the mid-tenth century is described in the Book of Ceremonies, with details of the early eleventh century revision being given in a poem by Christopher of Mitylene, and shown in several artworks. This reproduction repesents that later form, in which the old kampagia (sandals, below) dating back beyond the sixth century have been replaced by orange boots, and the original form of the lôros has been replaced by the tabard style. 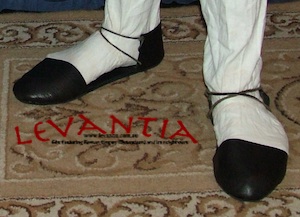 For some military ceremonial outfits see ‘Uniforms’ page in the military category.