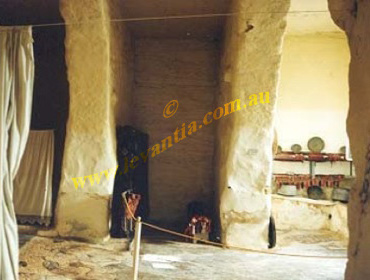 Left / above shows the interior of an ancient style of house common throughout the eastern Mediterranean region and across the Middle East and western Asia. The main structure in made of stone rendered with plaster and painted. The scarcity of large timber in the region results in the necessarily shorter ceiling beams being supported by masonry arches. Sleeping alcoves with their raised platforms are visible on the left of the picture and the kitchen area on the right. There, cooking could be done on a built in range such as that at right / below, or on a charcoal fired brazier (see the page entitled &#145Cookware’). The house is preserved in the Archaeological Museum at Madaba in Jordan. 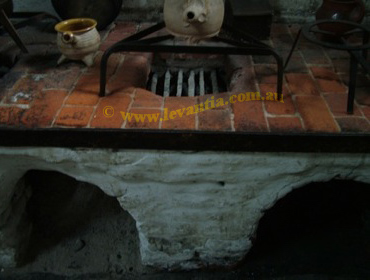 The range shown left / above is in the tudor kitchen at Hampton Court Palace outside London, but there are many such survivals dating from Antiquity onwards, not only in the Levant but across Europe.