A European knight of the late twelfth century 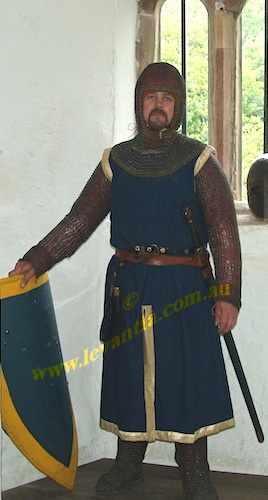 Heavily armoured knights like this are the familiar image of crusading armies, yet were always a small minority of the men who journeyed to the east to impose the will of the western christian church on the Holy Land.

Point at or click the picture to see another view.

Modern popular imagery greatly exaggerates the status held by knights of the eleventh to thirteenth centuries. Most were merely military retainers of great lords, and often quite poor, perhaps not even owning their own weapons and armour, let alone land, or that great consumer of labour and resources — a cavalry horse. In England up to 1250 a knight could be compelled by his lord to work in the fields with the peasants if the lord deemed it necessary. In Germany there was even a category called “Ministeriales” who, despite being knights, and sometimes holding high civil office, had a bound legal status similar to slaves.

The surcoat, which was derived, like so much else, from long established Middle Eastern fashions, took considerably longer to gain acceptance in military use than amongst civilians in the West for the simple reason that few men of the knightly class were wealthy enough to be able to have a costly garment destroyed each tournament or battle. It is only in the last quarter of the twelfth century that surcoats begin to be seen on knights in manuscripts made in England.

Mail leggings, or chausses, had begun to appear in the early eleventh century but did not become common equipment for even the best armed knights until the middle of the twelfth century.

Other aspects of this knight‘s panoply, such as the separate coif, or hood of mail, and vambraces, forearm protection, while known in the twelfth century, (and still earlier in the Roman world) became more prevalent in European use in the thirteenth century. 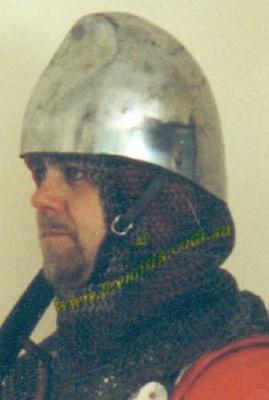 This type of helm, known as “Phrygian”, was one of the most widespread in the twelfth century. It was used by Westerners, Byzantines and Muslims. The squared ridge across the front of the helm makes it a very rigid shape, more resistant to being cut or crushed. 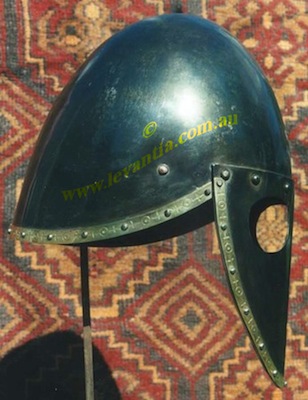 Later in the twelfth century open-faced nasal- and pot-helms began to be replaced by more protective helmets covering the face under the influence of practices employed by Byzantines and others for centuries. At first, face plates were attached to established skull shapes, such as this. Later the back plate was extended and joined up to make the full &#147barrel helm”. Most familiar from the thirteenth and fourteenth centuries, such barrel helms are first seen in Germany around 1180. 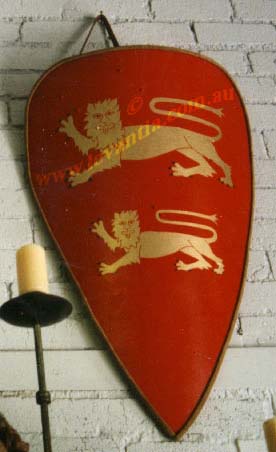 Heraldry did not attain the systematic personal form known today until the second half of the thirteenth century, but a century earlier very simple forms such as the one carried by the knight above were employed by eminent families to distinguish themselves and their retainers.

Not surprisingly, royalty was ahead of the general trend. This shield is painted with the emblem variously attributed to King Richard I or King John of England. The intricate terminology of heraldry is very much a late medieval development, but in that language the shield of the knight above would be described as “azure, a bordure or”, while the royal shield is “gules, two leopards stantant orֲ.