The Romans’ pragmatic acceptance of foreign military techniques where they were of proven effectiveness meant that they learnt very quickly from the nomadic tribes who harried their borders in late antiquity. Not only did they rapidly adopt the compact power of the composite recurve bow, they learnt so well that by the mid-sixth century the horse-archer’s thumb-draw was already well established in East Roman use, as is shown in this fragment of mosaic from the floor of the Great Palace of Constantinople. The Strategikon attributed to Emperor Maurikios written at the turn or the seventh century contrasts the Roman draw, with that of the Persians.1 The Persian draw is done with the lower three fingers, with the index finger laid along the shaft to lock the arrow in place. 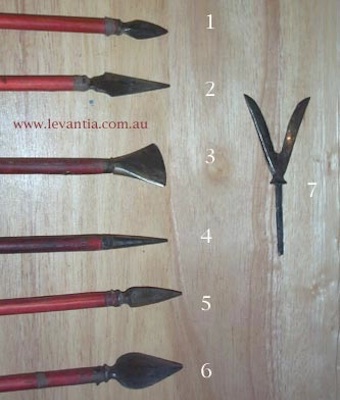 By the same period a wide range of specialty arrowhead could also be employed.2

1: Smaller diamond section mainly for hunting more robust game.
2: Shouldered broadhead for hunting lighter game.
3: Chisel point.
4: General purpose smooth conical pile.
5: Heavy diamond section armour piercing.
6: Hunting broadhead.
7: No, it is not a “strap-cutter” or “rope-cutter”, as popular opinion would have it. These heads were for hunting birds on the wing.

From Eastern Europe across to Asia arrows were normally secured to their shafts with a tang rather than a socket as in western Europe. This method was just as effective, especially in the loose-it-once situation of warfare, and required less construction time and material.

The method used by cavalry to carry arrows also show nomadic influence for they were held point upwards in a barrel quiver hung from the belt, as is shown on the page about the horse archer. Infantry quivers shown in manuscripts are round-bottomed cylinders slung from a shoulder-strap which held the arrow point downwards. In either case a man normally carried 30 to 40 arrows at a time.3 The so-called “Cyprus Expedition” of the mid-tenth century requisitioned a total of 2,000,000 arrows.4 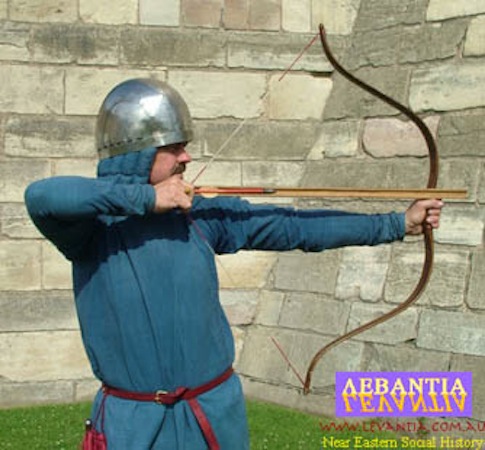 In addition to full sized arrows, Roman archers would also fire small arrows or darts down a channel called a sôlênarion.4 Such darts have about double the range of a full sized arrow and are harder to see. They were used as harassing fire against approaching formations. While a dart would rarely cause fatal injury, striking a man or horse in the face or eye would be a serious discouragement and help to break up a formation.

See a video of Timothy Dawson demonstrating the use of the sôlênarion.